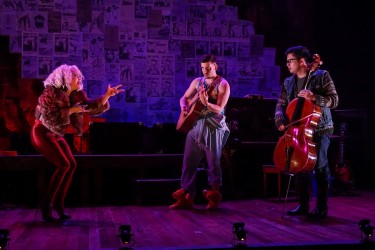 Justin Huertas throws one crazy coming out party with his raw, exciting premiere of Lizard Boy. He wrote the book, composed the tunes and portrays the title character. Sitting in on its spirited opening night, I thought of Bob Dylan’s line, “Something is happening here and you don’t know what it is…” The 90-minute one-act is a cockeyed blend of social commentary, high-tech romance, comic book super-hero clashes and a rock and roll show case. Some of it works well, some of it doesn’t, but it is all entertaining and remarkably original.
The display of the talents of Huetras and his cast mates Kirsten deLohr Helland and William A. Williams are a real joy. All three sing well and accompany themselves on a variety of string and percussive instruments. Huetras is a talented cellist and recently finished playing in a national tour of Spring Awakening. He and deLohr Helland also perform as an acoustic-folk duo Hanschen & Ilse. All three are self-assured, high energy and quite charming.
The plot involves a troubled first date for Trevor and Cary (Huetras and Williams), arranged via Grinder. Cell phones are never far away from these characters during their antic evening.
Trevor is somewhat ashamed of his deformity; for he is covered in green scales that are actually invisible to the audience. He acquired this condition as a child from a horrible clash with dragons at Point Defiance (don’t ask…the less we look into this plot point the better.) Huetras was asked by the Rep to write about his coming out as gay, but felt that was too boring. His burdensome green scales and accompanying superpowers certainly up the stakes. Trevor eventually learns that that which he is most ashamed of provides him with his strength.
The two young men go off to hear The Siren (deLohr Helland) perform at a local rock venue. She too is involved in the dragon back-story. The play works toward an over long climatic battle between the three characters and some formidable monsters. Graphics flashed on the back scrim were really effective and the sound effects were spot on, but finally the super powers fight stole the focus away from the humanity of the touching romance that is about to bloom between the two young men. It is also somewhat distracting that Siren’s character seems too one-dimensional.
Most of these concerns really don’t matter for the show is wonderfully exuberant and just plain fun. The cast and opening night audience were on a solid high throughout. Director Brandon Ivie skillfully choreographs the shifting of scenes, musical instruments and actors. The Huertas’ folk-rock style tunes are serviceable and performed with panache. Scenic designer L.B. Morse and sound designer Matt Starritt are to be credited for skillfully enhancing the production.
Lizard Boy plays through April 26 at the Seattle Repertory Theatre in the Seattle Center. For ticket information go to www.seattlerep.org. or call the box office at 206-443-2222 or 877-900-9285 (toll free.) Front row seats to every performance are only five dollars, available one hour prior to each performance at the Seattle Rep Box Office (in person only). These tickets are subject to availability and may be purchased in cash only.

Raucous Ride with Pride and Prejudice at the Rep
October 5, 2017
© 2021 Drama in the Hood. All rights reserved.
Site Design