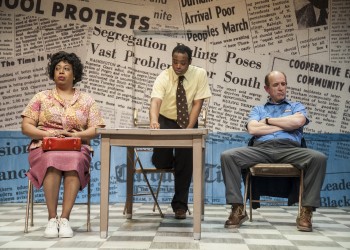 The true story of Best of Enemies takes place in the heart of the Civil Rights movement, right after Martin Luther King Jr. has been shot. The play begins with a sickening scene where a prominent leader of the Ku Klux Klan, describes MLK being shot, and then mourns that it was not a more gruesome, violent death. It will send chills up your spine. We then see a Civil Rights activist, Bill Riddick played by Corey Spruill, somehow convince the Ku Klux Klan leader to work together with a black Civil Rights activist to form a committee to survey people’s feelings about how public schools ought to go about implementing the mandatory integration policies. The leading roles of Ann Atwater, played by Faith Russell, and C.P. Ellis, played by Jeff Berryman were perfectly portrayed.

Berryman’s performance surprised me. I found myself hating him for the most of the play. I felt like a child, struggling to remember that he was playing a part and not actually an evil man. I still do not know how the play ended, and I somehow grew to love his character.

There is racial tension. There are tears shed. There is tons of laughter. We see people struggle with substance abuse and disease and socioeconomic politics. We see hardships and trials. And then, we see an unlikely friendship develop.

Toward the end of the play, when C.P. sheds his ignorance and most of his racism, and Faith is comfortable working with him, we see them both become ostracized within their community. A black and white “us versus them” took on a very different meaning by the end of the play. “Us” was C.P. and Faith, while the “Them” was the entire community of Durham, North Carolina.

The play was introduced by Scott Nolte, one of Taproot Theatre’s co-founders, who mentioned that the play was as relevant today as it was when it happened. In the midst of senseless shootings of black people and racial tension continuing to exist, the play reminds us that tearing down the walls that racism builds takes a lot of work. And it isn’t pretty. And it often means losing friends and making enemies. But, it is possible.

Buy yourself a ticket to this play. No, really. Please do. If you have to be late on your rent because you spent money on a ticket, show your landlord this review and maybe they’ll understand. If you have to skip dinner with a friend to buy a ticket, skip it! Or better yet, bring your friend along with. You don’t want to miss this play. Trust me, you really don’t.