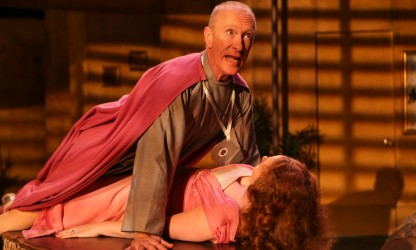 Knowing that the Archbishop of Paris threatened to excommunicate anyone who watched, performed in or even read the original version of Molière’s  great masterpiece, should be recommendation enough for any one to rush out and buy tickets for Tartuffe.  However, Seattle Shakespeare’s current production warrants immediate canonization for director Makaela Pollock.

Tartuffe  was first performed in 1664, at the Palace of Versailles for King Louis XIV,  who was later forced to publicly ban the production by the aforementioned Archbishop, the King’s confessor and former tutor.  However, Louis turned a blind-eye to private performances among the aristocracy, who at the time were the only class who could be trusted to resist subversive ideas.

Using satire,  Molière portrays a swindler, Tartuffe,  as a religious zealot, who ingratiates himself into the household of a wealthy man.   Bedlam ensues when most of the household plot to expose the swindler, and the swindler plots of dispose them of their wealth and engage in some sexual shenanigans.

Written in verse using Alexandrine rhyming couplets in the original French, the translation by U.S. Poet Laureat Richard Wilbur, is nothing short of a masterpiece.  Poetry is notoriously difficult to translate and had I not known it was a translation, I would never have known, as the text did not have even a hint of the awkwardness one usually hears in translations.

The intricacy of the verse was enhanced by highly skilled actors who made the it lyrically bounce around the theatre, audible in the last row,  while entertaining us with the foibles of the human condition and enlightening us about the twisted morality of the ostentatiously religious.

Director Pollock set the play in 1947, which was an interesting era; the costumes, by Christine Meyers, and set, by Carol Wolfe Clay, were very post WWII but not quite fully 1950’s.   It was also one of the last era’s when you could have a mother-in-law/grandmother as an authoritarian standard-bearer of morality and decorum, as well as the lower-class saucy maid.

Suzy Hunt as Madame Pernelle, the mother-in-law, was very much like Margaret Dumont from the Marx Brother’s movies.  A great believer in the divine right of mothers-in-law to dispense unsolicited advice, she was overly confident, exuded moral certitude and had a commanding voice, which suggested she was used to getting her way.

Bhama Roget played Dorine, the highly impertinent maid instrumental in saving the family from ruin, with comedic genius.  Her comic timing was perfection itself, her ability to speak the verse “trippingly off the tongue” was commendable and her long monologue about the problems of possible infidelity in forced marriages was the high point of the evening.

Other outstanding performances were Quin Armstrong as Valère the prospective son-in-law, Maya Sugarman as Marianne, the daughter and Brandon J. Simmons as a rather fey, but perceptive brother-in-law.

However, the performances of Peter Lohnes as Orgon, the master of the household and R. Hamilton Wright as Tartuffe were slightly disappointing.  Lohnes was an effective actor, but at times, the verse suffered and he mumbled some of his lines.   R. Hamilton Wright as Tartuffe was funny-extremely so, but played the part too much for laughs.   Mr. Wright never actually portrayed Tartuffe as the pinnacle of piety but merely as its parody, so the audience could not quite believe how he had actually been able to pull the wool over Orgon’s eyes.

However these were minor points.  Along with superlative acting, the set, costumes and sound by Robertson Witmer, all worked together to create a thoroughly humorous evening.  For those of us who had to wade through this play in college French classes, it was wonderful to see a standard text come alive.  Given the “culture wars” in the U.S. which are sooo influencing politics, it is nice to see religious hypocrisy unmasked.