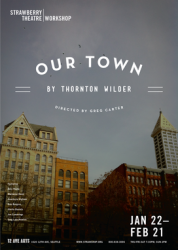 Two by two, we see the little things.

The Strawberry Theatre Workshop opened their enlightening rendition of Our Town, written by Thornton Wilder, on Thursday January 22, at 12th Ave Arts.  The humor of the Stage Manager, played by Amy Thone, draws the crowd in as the play begins while the audience  sees the scenery of Grover’s Corners come alive,  as if it  were 1901. The industrial stage and minimal props lends itself more to a construction site than a sleepy New Hampshire town- as is the intent of writer Thornton Wilder. Using a metatheatrical style, Greg Carter directed his cast into a humorous, yet strong performance with limited props, scenery and staging. With only one noticeable wardrobe change the characters blend in with the audience.

This mix of coming of age, comedy, and tragedy is shown through the lives of two families, of which the eldest children grow up, fall in love, and marry. The culmination is the death of the main character, Emily Webb played by Anastasia Higham, in which the humor is replaced by tragic emotion and the profound realization that life passes us by too quickly.

Act One, Daily Life is full of chatter and getting acquainted with the town’s people and back story of Grover’s Corners. The audience quickly realizes that the young and seemingly bashful George Gibbs, played by Joe Cummings, is fond of Emily Webb. The industrial stage comes alive with Shanna Allman as Holly Newsome, the milk lady, delivering “milk”, the part of her cow being played by a cart full of paint. Allmans performance is a reminder of how much we have changed as a society, we no longer get deliver milk by a friendly face- we are now faceless people in a long checkout line. Just going through the motions, somewhat foreshadowing what is to come in Acts two and three.

Act Two, Love and Marriage we see George and Emily fall in love and marry. While Higham is reading Cummings the riot act for being selfish you can’t help but smile at the girl’s bravado. Cumming’s performance as a shy teenager transforming into a nervous young adult on the brink of marriage is so painfully honest it is humorous.  Simultaneously, George is wresting with staying a “fella” or becoming a husband. The theme of two by two that is echoed repeatedly by the Stage Manager is brought to the forefront. Emily just wants to be loved and George wants to take care of her. In a sweet and innocent scene Higham and Cummings remind the audience of what it’s like to be young, in love, and with wedding day jitters.

The somber third act, Death and Dying brings the play to a close in the cemetery. In this act, the Stage Manager advances the play fourteen years forward from its starting point. The humor is gone and an eerie quietness takes over the theater. The epiphany moment Highams character has, after her death, is an impassioned and stirring performance. The realization that the little quiet moments with your loved ones will pass too quickly and not be remembered as important speaks a universal poetic truth.

This production leaves you laughing after Acts One and Two, while thinking about being young, in love, and actually living life. Act three sobers the audience, bringing the play to a close as the circle of life is complete with Emily Webb’s death. I left the theater with a smile and a feeling that I needed to appreciate the little things more. The two by two theme is still in my head.