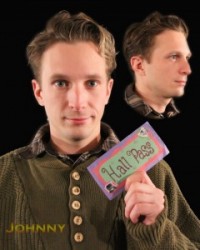 Not Quite Convincing Play about School-bullying

Ghost Light Theatricals presented a Seattle premier by Sean Graney, about a very topical subject, school bullying in 4th Graders Present an Unnamed Love-Suicide at the Ballard Underground on Friday night.  Although the “play within a play” had a moral message, as well as a solid production,  the lack of authenticity in the plot, language, setting and characters was too jarring to make much of an impact.

The basic premise was that a group of 4th graders performed a play, which their classmate Johnny had written, as his suicide note to his classmates.  Although the basic story line was compelling-he had taken revenge on his bullies and regretted it,  the details of the story were too unrealistic to allow the audience to believe the basic premise.

All the 4th graders were played by adults, but the language of the play was clearly not written by a 4th grader, both in terms of the emotional sophistication, vocabularly and flowery imagery.  Although the girls and the main character Geoff Finney could pass off “adults as 4th graders” the bad-guy bully Josh Bornstein, was badly cast as a 4th grader.    The whole plot hinged on sexual jealously of the bully whose girlfriend preferred the wimp.

Anyone who has ever been around 4th graders knows that this is the age when there is intense hatred of boys by girls and vice versa.  By third grade they have stopped playing with each other.  By 6th or 7th grade they show sexual interest in each other, but there is a big surge of “I hate the boys” right before they hit puberty.   Bullying based on sexual rivalry would have been more appropriate for middle or high schoolers.

Although some members of the audience seemed to enjoy the show and laughed at the right moments, there were just too many flaws in the script such as, why were the children always unsupervised if they were 4th graders, why was there no parental protests and a variety of other obvious discrepancies between what was happening on stage and reality.

Given what she had to deal with, director Jenifer Ross, delivered a solid production with a talented cast, a great set as well as excellent music.  It is a shame that the script was so weak, because I did not come out of this play understanding school bullying, especially in this electronic age, any better than I had before.