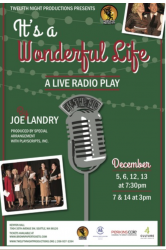 That was what my companion, an It’s a Wonderful Life expert who has seen the movie an estimated 27 times had to say about Twelfth Night Productions live radio play, performed in the charming Kenyon Hall in West Seattle. Though I was expecting minimal black costumes and an empty set for a radio show, I was pleasantly surprised by the vintage 1946 costumes and the creative set design, with the sound effects crew and organist right up on stage with the actors. The added bonus commercial breaks, jingles, and applause cues made you feel like you were a part of the production, getting a special behind-the-scenes treat at the studio.
More of the fun came from listening to the actors switch roles with their voices as they changed from old men to children, taxi drivers, detectives, and back-up singers. An actor I couldn’t identify made a particularly convincing Uncle Billy, and the only drawback of the whole production was my mental image from James Stewart’s George Bailey in the movie clashing somewhat with Nate Maddox’s portrayal.

The foley crew, Mitch Ebert and Christy Mooers, really did a bang-up job of being right on top of their cues, and my favorite part of the whole show was when Jake Cihla, the organist, switched to a piano in order to plod painfully through some Christmas carols, a la Violet Bailey. The irritating sound of a kid badly practicing the piano really builds George Bailey’s frustration in the climax. If you’ve never seen the movie, the show may have been a little hard to follow as it was pretty fast-paced, but that can be easily remedied in time for next year’s performance (the last show for this year has already passed).