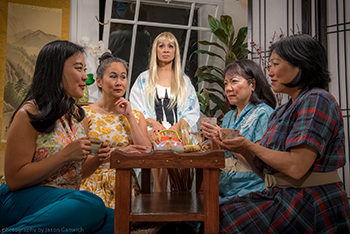 Tea, a play by Velina Hasu Houston, opened this weekend at Dukesbay Theater in Tacoma.  Taking place in 1968, it tells the story of five Japanese women who came to the U.S. after World War II as “War Brides.”  Unfortunately, they married “lifers” ( soldiers who stayed in the army after the war for 20 years).   As a result, they all ended up at the  infamous place all servicemen avoid: Ft. Riley, Kansas.

For example, I once knew a lifer, who volunteered to go to Viet-Nam just to get himself and his German wife out of Ft. Riley, which is a 100,000 acre army base, in the middle of the Great Plains, with a day-time population of 25,000.  In those days, before TV, the internet, jet travel, satellite newspapers, the entire world was far more provincial than it is now and small towns anywhere were very intolerant.

The adjustments these women had to make, coming from an extremely small densely populated mountainous country, with a mono-culture involving clear rules of etiquette and extreme group conformity to the U.S. were enormous.  To the Japanese, American culture would have seemed rude, loud, overly expressive, individualistic and without very clear rules of how to behave.

If you grew up on fish, rice and vegetables, to be confronted with Midwestern steak and potatoes must have been daunting.  A war bride in California or in an urban center with a large Asian population or just some semblance of diversity would have had it easier, but in a small town, it was difficult. War brides of European, British and Australian extraction all had a tough time, but Caucasians did not face the racial prejudice or the extreme cultural differences that Japanese women did.

Like the movie, The Big Chill, the death of one of their friends, Himiko Hamilton, brings four women together to drink tea and mourn.  The author, herself the daughter of a Japanese mother and a father of mixed-race ancestry (Caucasian, African-America and Native-American) wisely choose a cross section within the community of Japanese war-brides.

One of the women had married a Caucasian American, one a Mexican-American, one married a Japanese-American, one an African American and the recently deceased one had married a red-neck Oklahoman. This mixture created some fascinating conversations and revealed some of the racism within Japanese culture, as they all competed with each other about 1) who had made the best choice of husband, and2) how their choices of husbands had engendered the best children 3) and the value of assimilating vs holding on to traditions.   Love had been the driving force for some of the marriages, convenience for others.  Some had been happy, one at least had ended disastrously.

The play was told in a non-linear but coherent fashion as the ghost of the deceased woman walked around the stage narrating her story and interrupting the tea drinking. (tea-klatch?) At the beginning of the play, the women recounted their backstories but as the play developed, the actors acted out the various chapters in their character’s lives.

Each woman revealed how they had met their husbands, as well as how they were courted.  One of the most compelling scenes was when they acted out saying good-bye to their families.  Many Japanese families most decidedly did not approve of their daughters marrying representatives of the country, which had just dropped an atomic bomb on Hiroshima and Nagasaki, had defeated and humiliated them.  In the late 1940, international phone calls barely existed, so saying good-bye to one’s family was wretched.  The actors, directed by Randy Clark, certainly made the audience feel like they were saying good-bye to their families forever.

Another brilliant scene, which was both hilarious and sad, was when the women acted out their five husbands on a drinking/fishing trip, complete with strong matcho mostly Southern American accents.

There were particularly strong performances by Eloisa Cardona as Himiko Hamilton, playing the ghost of the deceased woman, and at times her red neck husband Billy.   Kathy Hsieh’s portrayal as Chizuye Juarez, was superb.  Chizuyu, was the most American of the group.  She had “gone native” that is to say, was the most assimilated into American culture, by deciding to really learn English, smiling all the time, and changing with the times by wearing trousers (this took place in 1968 when it was considered daring for middle-aged women to do so)   Tears came to my eyes when Ms. Hsieh delivered a powerful monologue about the devastation of being alone in Kansas after her beloved husband has passed away.

Designed by Burton Yuen, the superb set, a replica of a Japanese house, worked well with the numerous scene changes because Japanese houses have very little furniture, so the set changes were swift. Particularly enjoyable were the musical effects, especially at the beginning of the play; it rather set the tone for the whole play.

Although this was an excellent production, with strong acting and directing, I would say that the script had some weak  spots.   The beginning scenes were not as strong as the later scenes because the playwright relied on the characters telegraphing their backstories which made the dialogue somewhat stilted.  The later scenes where the women actually acted out their character’s backstories were more engaging.

After World War II, there were 100,000 Japanese War Brides, and even more from Europe, the U.K. and Australia, so it is a significant part of our history.  It is worth a trip to Tacoma to see this play. Street parking is no problem, and there is an excellent café, around the corner in the same building.