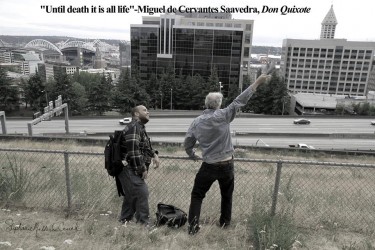 Don Quixote y Sancho Panza: Homeless in Seattle is a good piece on social justice, with a little local flavor thrown in. I confess I have never read Don Quixote, but from what I know of it I believe the show retains much of the original book’s essence if perhaps not the details. Alonso Quixano, the chivalrous main character, is in fact a schizophrenic wino trying to maintain his dignity and code of justice as he encounters hookers, prisoners, and other characters he meets on the streets of Seattle. Sancho Panza, a street-wise diabetic, befriends the older man and tries to keep him out of trouble—which is not easy with Quixano’s anachronistic code of conduct.

The set-up allows for a lot of interesting dialogue between Quixano’s ideals and Panza’s reality checks as the pair move through their adventures. The bilingual dialogue is also well done: Don Quixote only speaks Spanish, but Sanchez translates just enough to keep the script intelligible to an English-only audience, but not redundant for a Spanish/English speaker. Will Rose’s (the actor playing Quixano) clear diction could probably be followed with a high-school level of Spanish.

Ian Bond stands out from the ensemble for his versatility, as he changes roles throughout. The set decoration was also good, but the clothes could have been tumbled in a dryer with a few rocks—I could see fresh creases on a few shirts from where they had been taken out of a package, but I was also in the front row.

The stories that inspired Don Quixote y Sancho Panza: Homeless in Seattle come from people currently experiencing homelessness in Seattle as collected by Rose Cano, who works as a Medical Interpreter in the ER at Harborview Medical Center (which cleverly changes to HarborVista in the play). In addition to the various homeless she encountered through her job, she also spent three years traveling to shelters, tent cities, and other areas of the city to do readings and listen to the difficulties those trying to survive with chronic illnesses, language barriers, and little family or money face every day. Though the finished product is a little lacking in narrative and doesn’t have a driving conclusion, it more than makes up for it with a vivid depiction of modern homelessness.

If you think watching a play about life on the streets and drug addiction sounds horribly depressing, think again. Will Rose, José Amador, and the entire ensemble manage to keep the show light-hearted without turning it into a farce. In my opinion, there is just the right amount of humor to make for an enjoyable evening, as well as leaving you with thoughts to chew over when you leave the theater and are confronted with real people down on their luck in central Seattle. For those who know their local history, there is also a surprise appearance in the second act of the play, but I won’t say any more about that; you’ll have to discover it for yourself.