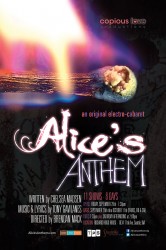 It’s not enough to be weird. You have to have substance, too.

In “Alice’s Anthem” Copious Love productions brings together an OK cast and all the Blacklight paint in Seattle to bring us an answer to the question does the world need another gritty take on Alice in Wonderland?

In this original ‘electro-cabaret,’ Alice is back! Except this time, she’s an actually diagnosed psychotic person living in a low-income neighborhood with an ambiguously loving/abusive mother. Her adventure takes her to a weird party den where she does drugs and hallucinates. Then, she’s led by her new friends to a weird cafe, where she hallucinates more, then back to the weird party den to do more drugs and hallucinate. I think she ends up on a bus at some point. But seriously, the whole thing is so dark and gritty, except for the many pop-culture and Youtube jokes sprinkled throughout the narrative for no reason.

When I say the cast is OK, I’m taking an average. The obvious star of this show is Dan Davidson, whose character “Mad Max” is an amalgam of many different caricatures and dialects, seamlessly transitioned, sometimes mid-line. He’s engaging, fun to watch, and his stage-presence is on-point throughout. Zenobia Taylor (Alice) has awesome hair and does a really fun, if a bit exhausting, Judy-Garland-as-Dorothy impression throughout the entire play. Olivia Lee and Justin Johns as the Cheshire Cat and the White Rabbit are solid dancers, clearly trained performers, and the only listen-able singers in the ‘cabaret.’ And everyone else seems to have been cast on the basis of being young and willing to be ridiculous on stage. And the songs are really good. They’re so good, one really is left to wonder why so few actual singers were brought in to perform them.

Playwright Chelsea Madsen tries to bring new life to Lewis Carroll’s own style, full of attempts at riddles and wordplay akin to the those of the original story. Unfortunately, Carroll himself was a brilliant mathematician and linguist, and not everyone can come at a story like this with quite his nuance. “Alice’s Anthem” ultimately delivers weak wordplay and a lot of really tiresome, repetitive, and ham-fisted exposition.

Brendan Mack’s direction was a mixed-bag. Literally, the audience was given little mixed baggies of trinkets that were supposed to aide us in following along on the journey. To be honest, they were just distracting. The stage is used well by the performers and the action is easy to follow, until the second act, which is lit by blacklight. This trick, along with other choices made in the writing and acting, made the goal of the play quite clear: the audience is supposed to feel as insane as Alice herself. We’re supposed to sympathize with her. And in that way, the show was quite successful. Finding myself in a seemingly endless cavalcade of deafening, repetitive nonsense, I, like Alice, only wanted one thing: to escape.

“Alice’s Anthem,” directed by Brendan Mack, will run from September 26 to October 11th on Thursdays, Fridays, and Saturdays (7:30pm and Saturday matinees at 2) at Richard Hugo House (1634 11th Ave). For tickets, visit alicesanthem.bpt.me