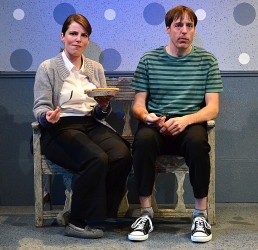 Evan Whitfield grounds the show in a skillfully nuanced performance as Zed, an introverted, down-trodden, educational text editor who has returned to his small-town home for his mother’s funeral.  Linz, played by an exuberant Tracy Leigh, literally and figuratively saves his life in the opening scene, pulling him away from oncoming traffic and eventually offering him a second chance in life with a job in her gourmet cupcake shop.  Whitfield’s Zed (not his real name, but he must have always come in last in school) is a joy to watch as he transforms from a Charlie Brownish sad sack to something quit different in Act Two.

Alyssa Keene takes on the role of Zed’s sister, also back home for their mother’s funeral.  She is visibly racked with an internal rage, unhappily dealing with the shoddy cards she’s been dealt: a mother who seemed to have ignored her all her life and a dead-end phone solicitation job in which she is currently trapped. It is a credit to Dillman and director Anita Montgomery, who had worked with the script in its infancy, that the piece is able to find so many life-affirming moments in such a somber set-up.

Stephen Grenley, who has done a lot of good work at the Tap Root Theatre recently, assumes three roles for this show, none more effective than the philosophical postman that was very close to the recently deceased mother. His calm, good nature provides a refreshing oasis in a plot that is peppered with some wildly zany shenanigans.  David Goldstein rounds out the cast as the eccentric, temperamental gourmet cupcake baker that plans to take the hapless Zed under his wing.

The play is remarkably well crafted and delivers a baker’s dozen insights on  finding some kind of contentment in a modern world that can appear so steadfastly heartless and foreboding.  Magical TV sets, electronic hissing that seems to have been lifted right out of a David Lynch movie, bicycling ghosts, eerie calliope music, solemn “cupcake tastings” and gleeful “Burial Property Brokers” all figure in the mix and add some intriguing layers to what at first seems to be what Montgomery refers to as “a little comedy.”

Lisa Dillman’s American Wee-Pie runs at the Seattle Public Theater at the Green Lake Bathhouse through February 16.  The theater has a brand new sound system and Sound Deisigner Robertson Witmer makes fine use of it for its coming out party.  The sounds and music of the small town almost seem to be another character in the play.   Scenic Design by Andrea Bryn Bush; Lighting Design by Tim Wratten and Costumes by Candace Frank.  Ticket information at www.seattlepublictheater.org.