Homo for the Holidays 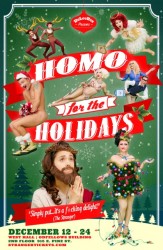 Don we now our what apparel? Oh, yeah!

Brought to us by DeLouRue Presents, Homo for the Holidays is back for the 7th year running. Hosted by local drag star BenDeLaCreme, this is an irreverent-but-heartwarming cabaret show in which a much beloved cast of characters familiarizes itself with the meaning of the holiday season.

This is no drag pageant, nor does it have the sardonic flavor of many gender-blending performances. Yes, Jesus is played by a woman (an adorably low-key ilvs strauss) and discusses his sexual relationship with the twelve disciples (apparently Judas had a penchant for flogging, which I think we all knew). Yes, there is a married jewish couple (Major Scales and Jinkx Monsoon/Scott Shoemaker) who do not come unmarred by stereotype. But this show is somehow playful and loving for it’s entire length… and at times, ‘loving’ takes on several meanings, whether we are learning what cultural inclusion looks like, watching a peppermint flavored exotic dancer pole-dance on a candy cane (Inga Ingenue), or witnessing an anthropomorphic gingerbread man douse his posterior in milk (Faggedy Andy).

The candy-colored set, the costumes, the sequins, the simple prop comedy come together to make this a blindingly funny show that will make any burlesque fan swoon, especially but not limited to those who are already fans of these local cabaret geniuses.

Homo for the Holidays is playing at West Hall, OddFellows Building 2nd Floor 915 E Pine Street, Capitol Hill. It opened on the 12th and will be showing from the 20th to the 24th at 7 and 10 pm. Jinkx Monsoon will be performing on the 23rd and 24th. Tickets at www.strangertickets.com