Holiday of Errors -or- Much Ado About Stockings 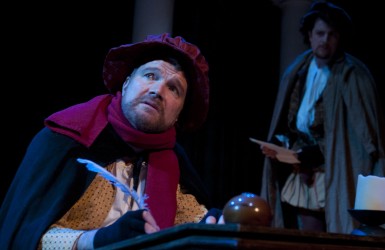 SOUND THEATER COMPANY saves theater in this Shakespearean, Christmas romp.  In the new comedy from Frank Lawler and Daniel Flint, Holiday of Errors, directed by Teresa Thuman delivers the naughty in this smorgasbord of holiday fun.  Writer Frank Lawler also stars as William Shakespeare struggling to make ends meet as the royal court threatens to close his theater for good.  Against all odds he is invited to Whitehall where he plans to mount a Christmas musical based on his own Richard III.  Modern references to political and popular culture invade the cleverly drawn Shakespearean themes like cross-dressing and over pronounced innuendo, as well as puns, rhymes, and a playfulness with words.  Wrought with racy humor this well acted play takes the idea of saving Christmas, and translates it to saving the theater itself.   The performance takes on a self consciousness as if Holiday of Errors is theater’s last hope.  This urgency compels the story forward as sheer silliness and joy drive the multiple sub plots.

Theater, Christmas, and Christopher Marlowe (Daniel Stoltenberg) are all dead, and the show takes on a Shakespeare in Love feeling as Twelfth Night is gradually being realized through the attempt to mount Richard III, and if you don’t know your Shakespeare much of it will be lost on you, but if you are an insider the witty references will delight you.  The Complete Works of Shakespeare is dropped square in the middle of the holidays.  Marlowe’s ghost appears to Shakespeare, as the already multi-plotted and multi-themed story takes on Dickens, as A Christmas Carol joins the fray of themes fighting for attention.

The main themes are in fact all represented in the stripped down set of pillars, curtains, and holiday wreaths.  The simplicity of the set (Richard Schaefer) is its strength, as minor changes create new spaces; the curtains allowing for settings as intimate as Shakespeare’s writing room, to a wide open space like the hall in the palace of Queen Elizabeth (Elinor Gunn).  The ragdoll costumes (Justine Wright) work well to complement the romp, as bright colors and unexpected ties and holes perfectly match the rag-tag revelry of the cast.  In a show where many actors are playing multiple roles, the obvious theatricality of the attire ties in well with the idea of saving the theater.

Though the story was an exercise to follow, and jokes seemed to, at times, come from all directions, the flat characters were straight from the pages of Shakespeare and when Terry Boyd as Aloysius hilariously asks, “why even bother anymore?” the self-consciousness of the play hits its peak; the meta-theater is complete.

HOLIDAY OF ERRORS  runs December 5th-21st Fridays and Saturdays at 7:30, and Sundays at 2:00.  Center Theater – 305 Harrison Street – in Seattle Center Armory (formerly known as Center House).  (206) 856-5520.  A collaboration with One Lump or Two Productions.  http://www.soundtheatrecompany.org

Tickets: http://www.brownpapertickets.com/event/490088 or at the door