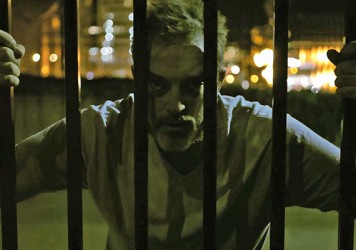 After being shot by a soldier wielding the gold-plated gun of Uday Hussein, a tiger talks about the meaning of life and death in a Godless afterlife on the backdrop of the Iraq War. In the heat and heart of the Iraq war where ghostly visitations by the dead are as commonplace as the gunshots of combat, Bengal Tiger offers a visceral interpretation of the modern wartime experience.

The world of the living and the dead are so intermingled it’s almost impossible to distinguish between the two. Rajiv Joseph weaves their narratives smoothly in and out, neither one taking center stage, neither one discounted.

The tiger, played by Mike Dooly, wears the armor of the displaced soldiers and the invaded at once, admitting early on his immediate awareness that he will never be able to return to his home – his native home a far off Bhutan, his current one, the Baghdad zoo, pilfered by both warring sides. Dooly carries the story with an up close and personal honesty that is all at once sardonic, sage, and darkly humorous. The tiger mirrors the hope of the invaded while also mirroring the soldiers’, Tom and Kev’s, painful reality that they too will never be able to return home alive or the same. In the play’s unfolding we watch this awareness take hold in the lives of each character on stage. Jonathan Crimeni, who plays Tom, renders the evolution of his character without a hitch while Ryan Higgins portrayal of Kev, is filled with so much tension that it’s impossible not to feel the enormity of his desperation.

Joseph contrasts the simultaneous beauty and horror of Musa’s topiary garden. To the dead it is a new Eden where they wait for God to show up. To the living it is the property of a cruel madman and the site of Hadia’s kidnapping. Unlike showings of this play on Broadway where Musa’s topiary work is a huge part of the set, the crew projected images of the garden, stacked blocks and vines, against the stage walls, allowing the garden itself to become a character on which several beliefs and ideologies are projected.

The tiger’s search for meaning in a Godless afterlife is a reflection of the soldiers search for meaning and Musa’s search for redemption after the ill-fated rape and murder of his younger sister by his former employer Uday Hussein. The care that Erwin Galan took to portray an affectionate Musa is tangible. His performance was both measured and heart-wrenching, which he pulled of very well.

I’d go see this play again if only to unpack the complexities that lay within one more time.