“The Temperamentals” is personal, political, and timely

A play by Jon Marans 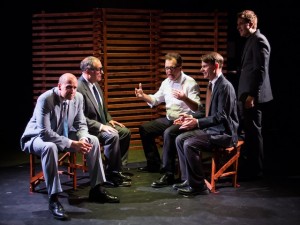 With marriage equality now law in parts of the land, and a tectonic shift underway in public attitudes toward homosexuality, it is timely to consider the roots of the LGBTQ movement. Progressive change in society requires sacrifice and courage by those willing to face the status quo and clamor for justice.

Jon Marans’ 2009 play “The Temperamentals,” produced by fledgling theater company Arouet, now through May 25 at The Ballard Underground, inspiringly recreates the personal and political challenges of the founders of the “Mattachine Society,” who well before the watershed 1969 Stonewall riots braved public opprobrium and the paranoia of the McCarthy era to form the first association for homosexual empowerment.

Roy Arauz’ understated direction and Kim Rosin’s bare-bones scene design demand a lot from the audience in the first half of the play. Arauz’ staging frequently leaves one or another actor’s face hidden to half the audience. A long opening scene between Harry Hay (played with nuanced volatility by Daniel Wood) and Rudi Gernreich (an engaging, conflicted Jaryl Allen Draper) relies on subtext and innuendo, effectively if opaquely conveying a sense of the “coded language” of a despised sub-culture. Minimalist set pieces create indistinct changes of place and time. Even with some foreknowledge of the Mattachine Society’s history, one may struggle in the first act to follow events in various times and locales (Hollywood, Germany, dreams…) and to sort out characters despite the fine ensemble work by Greg Bee, Will Halsey, and Justin Ison.

However, the five actors’ attention to details of relationship and character overcome these minor obstacles with captivating emotional truth. By the end of Act One, the arc of “The Temperamentals” comes into focus as a growing network of friends coalesces around the police entrapment of a carnival roustabout, Dale Jennings (one of shape-shifting Justin Ison’s roles.) Their collective oath of solidarity as he agrees to submit to a trial by jury instead of the customary police shake-down highlights both the political necessity and personal cost of being the “cause célèbre” around which the growing movement for homosexual rights gains traction. The current “gay spring” of marriage legalization has roots sixty years ago in that personal choice to take the stand for individual rights in the face of collective prejudice.

Act Two also brings more clearly into focus the relationship of Harry and Rudi, torn by conflicting allegiances to the Communist Party, fellow Mattachine Society members, and differing personal goals and needs. The outcome of their political and personal struggles highlights the imperfect human heart of grassroots activism, and the presence in the world, perhaps, of amazing grace.

One of the many strengths of this production is the occasional seamless inclusion of the audience: as members at a Mattachine Society conference, a jury at a courtroom trial, and congregants for a poignant benediction that celebrates the journey of the LGBTQ community and evokes a blessing for the way ahead. This entwining of audience and performance inspires affection and respect for the real men and women who despite profound hurt acted on their belief in who they were.

“Who we are” – a statement uttered with violent urgency by Harry Hay – is not only personal; our choices and actions are threads in the tapestry of events woven over time into the shape of the future. By the end of the play an essential message emerges: we are all players in the unfolding history of our lives and our time. A backward glance at early efforts that gave rise to today’s LGBTQ culture is an opportunity to reflect on our current concerns in the fullness of their complexity, imperfection, and significance for the future.

Anyone who appreciates today the dawning acceptance of homosexuals into the social fabric of our country should see this entertaining, emotionally courageous, and inspiringly humble production.

THE TEMPERAMENTALS, a play by Jon Marans, directed by Roy Arauz, produced by Arouet and Alfred Zem Hill. At Ballard Underground, 2220 NW Market St., Ballard, through May 25. Tickets at www. arouet.us/tix or (800)838-3006.