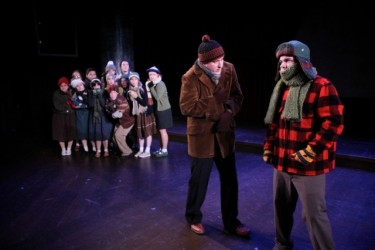 Walking into the theatre for Book-It Repertory’s Owen Meany’s Christmas Pageant, you can see that you’re in for an old-fashioned nativity play in a hometown church.  The stage is set with stained glass windows, a communion rail, and a shabby upright piano all dimly and reverently lit.

Then you notice the disco ball on the ceiling and the stuffed armadillo bathed in a circle of light.  Thus the mood is set for a nostalgic story with a wacky touch.

This year marks Book-It’s 8thre-mount of Owen Meany’s Christmas Pageant, an adaptation of a portion of John Irving’s novel, A Prayer for Owen Meany.  Pageant centers around the holiday memories of an eleven year old boy from 1950s New Hampshire .  The main character, Owen (played very well by Josh Aaseng), is just that—a character.  A smaller boy with a “unique” voice and definitive Christmas pageant agenda, he is somehow endlessly opinionated yet endearing, aggravating yet lovable.

While the play is shorter in length and a bit short on story, it is still entertaining.  The ensemble cast of twenty performers pour all of their energy into the show and their commitment and enthusiasm are refreshing.  It is important to pay close attention to their dialogue, though—the quick switches in narrators and shifts from first- to third-person point of view can be confusing and hard to follow.  Aaseng as Meany, Ashley Marshall as Mary Beth Baird/the Virigin Mary, and Harry Todd Jamieson as the reluctant Announcing Angel give notable comedic performances.  The live, simple piano music is also a treat.