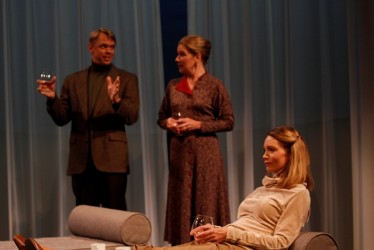 One *could* summarize Harold Pinter’s 1971 play Old Times as a dark domestic comedy about a woman named Kate (played at ACT by Cheyenne Casebier), her husband, Deeley (played by Jeffrey Fracé), and her old friend, Anna (Anne Allgood).  Urbane forty-somethings, they sit in a seaside home in England,  reminisce about the past, sip drinks, and smoke cigarettes.

But this is no ordinary get together.  The conversation rolls along, and then the characters plunge into silence.  One moment they laugh with each other, the next they icily stare at one another. Anecdotes interweave, and then they contradict.  Are these people alive?  Are they dead?  Are they actual individuals, or different manifestations of the same personality?

Who knows?  Who can say what Harold Pinter is up to in this (or any?) of his plays?  As in many modern, absurdist pieces, meaning lies heavily with the viewer.  For me, watching ACT’s current rendition of Old Times isn’t so much about “memories” but the act of remembering; it’s not about “expectations,” but the act of expecting.  Don’t try to decode it.  Don’t try to unscramble it.  Just live in the moment with these people.  And you should be able to enjoy it, because it is as good a rendition of a Pinter play as you will ever see.

Pinter’s plays require a disciplined and mature style of acting that allows the subtext to unfold and each actor does his job very, very well.  The production is perfectly paced, and Director Victor Pappas’s blocking seems to spring organically from the script.  Robert Dahlstrom’s living room-style set is done almost completely in a palate of whites and greys, and the result is reminiscent of a blank canvas perfect for the characters to scribble their memories upon.  Most of the color is provided by Sarah Nash Gates’ stylish ‘70s costumes.

If you like Pinter or want to give him a try, you should definitely go to Old Times.