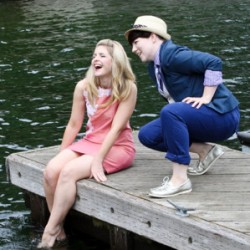 There are some really lovely moments in Wooden O Productions’ “Twelfth Night”.  Director Makaela Pollock has given the play a 1960s beach theme that perfectly suits the atmosphere of Shakespeare’s melancholic meditation on love.  The play is a favorite among Shakespeare’s oeuvre because it features all of his most successful comedic tropes.  There are twins!  There are mistaken identities!  There is gender confusion!  Music and drunkenness!  Clowns!  Homoeroticism!  AND, like his other popular play, “A Midsummer Night’s Dream”, the whole thing ends in a triple wedding!  “Twelfth Night or What You Will” plays like a Greatest Hits compilation and, for the most part, Wooden O Productions amplify rather than undercut that sensibility with their performance.

Emily Chisholm understands Viola’s sweetness without overplaying her passion for Duke Orsino (Connor Toms) or her disdain for Olivia (Emily Grogan).  The clowns, Sir Toby Belch (Jim Gall), Sir Andrew Aguecheek (Matt Shimkus), Maria (Jesica Avellone), Fabian (Harry Todd Jamieson), and Feste (Justin Huertas), all discharge their parts with gaiety.  Gall bandies about the stage as the besotted Toby.  His compatriot Shimkus as Aguecheek is an ignorant fop.  Avellone turns in a stand-out performance as the saucy wench that devises tortures for the effete Malvolio (George Mount) and wins Toby’s love in recompense.  Jamieson also has his moments as the frequently-overlooked Fabian.  He plays the part as a bizarre scoutmaster of sorts.  Huertas’ ukulele is a welcome presence, as is his singing.  Mount nails the preening puritanism of Malvolio; yet his accent appears indistinct.  Is it English?  Scottish?  German?  Welsh?  French?  We are given to understand that Malvolio is not like the other inhabitants of Olivia’s court, a fault for which he is severely punished, but Mount’s impenetrable accent leaves the nature of his “foreign-ness” an open question.

With such a strong ensemble, it is regrettable that Grogan in the thankless role of Olivia grates at the senses.  Admittedly, it is difficult to find a character in the object of Orsino’s desire and Viola’s scorn; however, Grogan overacts egregiously.  Her every line is delivered to the cheap seats, even though the performance is free.  Upon her third entrance, I overheard the perhaps eight-year-old boy sitting on the next blanket over say to his father, “Oh, no.  I don’t like her.” an astute observation by a budding theatre critic.  While Grogan’s performance renders incomprehensible Orsino’s deep love for her, Toms and Chisholm display and easy chemistry as Orsino and Viola that reaches a satisfying conclusion in the play’s final moments.  Less satisfying is the abortive relationship between Antonio (Michael Feldman) and Sebastian (Matthew Gilbert), a famously confusing pairing about which Director Pollack seems not to have made a determination.  In such a festive setting as Capitol Hill’s Volunteer Park Amphitheatre, Malvolio’s killjoy assertion that he’ll have his revenge “on the pack of you” also fails to land.  We will not be cowed into feeling sorry for our merriment or bullied into not enjoying this delightful production.