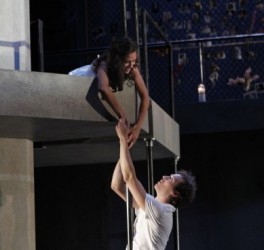 The most prescient question when approaching any staging of Shakespeare’s “Romeo and Juliet” is whether or not the production will serve as a good date night.  In the case of Director Allison Narver’s version of the Bard’s classic tale of starcrossed lovers, the answer is a resounding yes.  Attractive young co-eds swoon over each other and kill themselves for love.  Also, there are swordfights.  What could be more romantic?  For the regular theatre-goer, however, several of the design, acting, and script-editing choices may appear confusing.  In attempting to set their “R&J” apart from any “R&J” at any regional theatre in the country, the Intiman has created an amalgam of styles and approaches that do not always blend harmoniously.

A great pleasure of the Intiman Theatre’s summer repertory festival, which stages four plays contiguously until August 25th, is watching the fat cowboy (Quinn Franzen) of Wednesday night’s performance of John Patrick Shanley’s “Dirty Story” transform into the lithe lover of Friday night’s “Romeo and Juliet”.  The manipulative and dynamic Hedda (Marya Sea Kaminski) of Thursday night’s Ibsen becomes the doddering old nurse of the following night’s Shakespeare.  The high-stepping drag queen Sissy Jizmor (Michael Place) of Wednesday night’s “Miracle!” by Dan Savage, is Thursday night’s lovesick Lovborg, and Friday’s flamboyant Mercutio.  We view each play individually; yet, we cannot help but imagine the festival as a whole.  Each actor’s previous performance haunts their current incarnation.  Viewed in concert with the other three offerings, Narver’s “Romeo and Juliet” features some of the festival’s most exciting performances, namely, Place’s Mercutio, Kaminski’s Nurse, and Allen Fitzpatrick’s Friar Lawrence.  Seen in isolation, however, the Intiman’s R&J alternately pleases and confounds.

One of the production’s more confounding aspects is Jennifer Zeyl’s “urban” set.  Repertory presents particular challenges to set designers who must situate two different plays into a single space.  For the most part, Zeyl is equal to the task.  Her setting for “Romeo and Juliet”, however, is flat where Hedda’s possesses dimension.  It is pedestrian where Hedda’s is inspired.  Three adjacent garage doors serve as its focal point.  These clattering doors disrupt several tragic scenes.  Above, is a gangway, from which characters (I truly wish that this were not the case) periodically hurl bags of excrement upon the bystanders below.  Stage right houses Juliet’s famous balcony scene and, for symmetry’s sake, a second balcony on stage left remains empty.  The faint outlines of Zeyl’s intricate and enveloping “Hedda” set are still visible, causing one to wonder if the present “R&J” set were not sacrificed for the cause of its far lovelier twin.

Deb Trout’s striking costumes are another confusing aspect of the production.  Within the context of the entire festival, they represent some of the most interesting and visually appealing designs on the Intiman’s stages.  The costumes feature white linen forms to which photographs have been painstakingly sewn, creating visual family trees that the characters physically carry with them.  Trout rightly eschews the ridiculous convention of draping the Capulets in red and the Montagues in blue or some other nonsense.  Nonetheless, the costumes jar with other design choices in Narver’s “R&J”.  The titular characters wear no pictures on their clothes.  Are they exempt from the past of their families’ bitter conflict?  A program note helpfully explains that the tintypes are “pictures of the dead”.  Without this aid, the mind wanders upon them, conjuring images of immigration, of devastation, of Warsaw ghettos and “bring me your huddled masses”.  The red fezzes, worn by Lords Capulet and Montague, place us in another world entirely.  When Friar Lawrence arrives clad in a black hoodie emblazoned with a white dove, and Romeo apes “Miami Vice” in a red undershirt and white leisure suit, we wonder if any ideas remained on the backstage floor.  Everything that could be slyly suggested has been overtly stated.  The dove theme repeats in the curtains behind the garage doors, retaining all the subtlety of an emoticon.

Where the production design is confused and clumsy with its symbolism, we look to the actors to provide unified, nuanced performances.  Instead, “R&J” contains a few stand-out performances, several workmanlike ones, and a couple that become increasingly difficult to bear.  As mentioned above, Place’s Mercutio, Kaminski’s Nurse, and Fitzpatrick’s Friar Lawrence are all exceptional and well worth the price of admission.  Place and Narver have the courage to bring the homoeroticism between Mercutio and Romeo to the forefront.  This choice results in some of the most interesting moments in the play.  Kaminski as the nurse steals every scene in which she appears, tastefully wringing comedy from even the most tragic circumstances.  Fitzpatrick is pitch-perfect as the Friar to whom the lovers turn for help.  Much of the rest of the cast discharge their parts admirably.  Hannah Victoria Franklin is stern and merciful as the Prince.  Shawn Law plays a double role as firebrand Tybalt and meek Paris.  Taking a page from Superman and Clark Kent, a pair of glasses serves to distinguish between the two roles.  He has the distinction of being killed by Romeo twice.  Quinn Franzen as Romeo is athletic and resolute, though once he meets his lady love, his performance flattens into a single note played again and again.  So, too, Fawn Ledesma’s Juliet oscillates from teeny-bopper frenzy to at times comical despair.  The message should be “love conquers all” and not “love causes brain damage”.

Narver’s filmic cut of the play maintains the production’s uneven theme.  Some of her choices are exciting reworkings of time-worn scenes.  The Nurse shares her fell news with Juliet at the same time that Friar Lawrence instructs Romeo of his banishment.  Narver deftly cuts back and forth between the two scenes.  This device fares worse when she intersplices Juliet’s monologue in anticipation of Romeo’s arrival with the aftermath of Tybalt’s murder.  The two scenes are so different in tone that the audience receives emotional whiplash and both scenes are robbed of their lyric power.  Narver’s choice to repeat the prologue at the play’s conclusion is redundant and undermines Franklin’s impassioned reading of the final couplet, “For never was a story of more woe than this of Juliet and her Romeo.”  In short, there is enough here for a romantic evening out at the theatre, as long as you pay more attention to your date’s eyes than the production’s inconsistent design, acting, and scripting choices.