TEAM OF HEROES: Behind Closed Doors 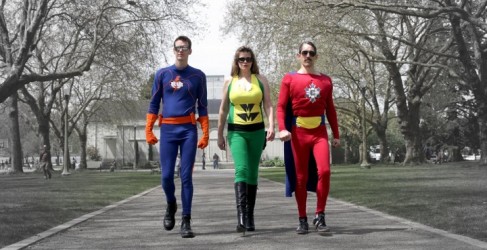 Developing new work is always risky business. Unlike the great classics, contemporary works just have not been tested over time. And in a digital age such as ours, where attention spans have dwindled down to about the length of a tweet, and where pop culture has basically given us the equivalent of a cultural lobotomy, new works run the risk of falling victim to the same inanity. And unfortunately, this seems to be the case with Annex Theatre’s latest production, “Team of Heroes: Behind Closed Doors” by playwright, Alexander Harris.

As explained in a note from the creators in the program, the show developed from a not-so-profoundly philosophical discussion over the question of which superpower would be better: the ability to fly or to become invisible.

“And somewhere in that debate, one of us would turn to the others and say, ‘Hey, why don’t we do a play about superheroes?’”

“And we’d all look at each other and respond, ‘Okay, sounds like fun.’”…

“And 18 months later we’d all be here together, at Annex, watching a play about superheroes who say fuck a lot.”

So, I’ll be the first to say that I am not impressed with society’s new found obsession with the likes of zombies, vampires, and in this case, superheroes. Call me un-American, but I find it stupid and juvenile. And why a theatre company with an otherwise good reputation would want to spend time and money on producing works with such a dearth of intellectualism and artistic merit is beyond me! But then again, we live in the Age of Inanity.

Ok, so this kind of show is not my cup of tea, but that said, there were some aspects of it that I enjoyed (in addition to the tight-fitting spandex superhero costumes that the characters sported). I enjoyed their integration of video into the production, and they had some cute ideas in terms of “special effects” and use of props.

The acting was so-so. I have seen many of these actors before in other shows at other theatres, and KNOW that they are talented, especially Ryan Higgins and Jason Sharp. But all in all, it was kind of flat and uninspired. “Chaos Theory,” though entertaining, was not extreme enough. “Miss Dixie” was somewhat clichéd and stilted. And I never really understood why “Madame Mayhem” was so pissed off all the time.

Then there were just some problems with the over all structure of the show. Act One ended abruptly and awkwardly. And the Second Act just sort of petered out. I’m not sure if this is a problem with the writing, the directing, or both, but either way, it needs some reworking.

I do not want this to seem like a completely negative review. There were some entertaining and innovative components to the show, — and a lot of potential talent. However, I just think that those talents should be put to better use by choosing to do plays that have something to say.