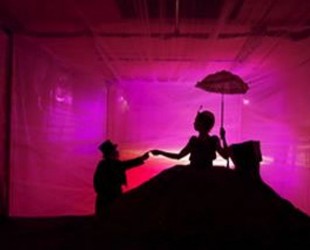 What is the play about? Aging?  Loving?  Consuming? The inanities (or little miracles) of life?  Is it a portrayal of a descent into madness?  A critique of humanity’s relationship with the environment?  An extended gestalt therapy session?

As the program notes to the play state, Susan Sontag once wrote that Beckett is a playwright who “dramatizes the microstructure of action” and his Happy Days is emblematic of this style.  As we enter the small auditorium and look up at the stage, we see old black and white reels of Fred Astaire and Ginger Rogers gliding across an elegant dance floor, locked in one another’s arms, while a muted, minimalist audio track plays.  The curtain parts to reveal the play’s protagonist, Winnie, dressed in a black and white bathing costume and buried up to her breasts in a huge sand mound that looks a lot like an ant hill.  It appears that we are at the beach:  the gauzy curtains that fill the back of the stage are glowing yellow with sunshine and the leading lady has a white parasol and a big black bag from which she carefully draws a series of items throughout the play, from the more typical beach bag things, such as make-up, to the less typical, like a handgun.  Winnie talks to the audience; she talks to herself; she tries to talk to her husband who never seems to face her, and each word, facial expression and gesture paints a narrative picture as big as the most verbose, sweeping epic could.

Much of the brilliance of the production turns on the excellence of the acting, John Kazanjian’s directing and Nina Moser and Lindsay Smith’s designing.  Ewald runs a brilliant marathon as Winnie—she is downstage center for the entirety of the one hour and 45 minute play, and given her physical restrictions, she has mostly only her face and voice to serve as her acting tools.  Yet, under her control, the rhythm of the play is perfect, and laughs (and gasps) occur where they should.  Walsh, though in the much smaller role of Winnie’s husband, Willie, is also excellent.  Their bits together are a bit reminiscent of the exchanges between Shakespearean clowns—they don’t seem to be expressing much, but really, they are.

As the play progresses, we see that circumstances for Winnie and Willie are deteriorating.  Though they are both dressed in black and white just like Fred and Ginger, their life is no romantic, elegant waltz.  They hardly move.  They are stuck, and yet we as an audience are compelled, happily, to watch.