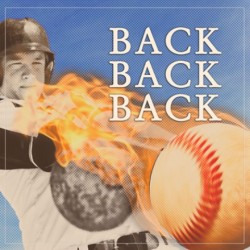 Seattle Public Theater’s Back Back Back is a play about baseball.  Appropriately, director Kelly Kitchens and all three actors are avid baseball fans and players, and this real-life love of the game translates well into their performances.  The play revolves around three players who must confront the widespread use of steroids in their profession (although interestingly, the word “steroids” is never used in this play).

Ray Gonzalez plays the boisterous Raul, full of foul locker-room language and crude sex jokes.  In addition to having no qualms about using steroids himself, Raul pushes them on the younger players.  Although Raul is dubbed the “bad boy” of baseball, Gonzalez’s performance makes it difficult to condemn Raul.  In an odd way, he ends up being the most honest character.  Patrick Allcorn plays Kent, who has mixed feelings about the drugs (but uses them anyway).  Allcorn effectively captures the many sides of Kent, transforming from a strong mentor figure to a broken man with a crumbling marriage to an angry, drug-dependent professional athlete.  Trick Danneker nails the character of Adam—a lovesick rookie who’s often the butt of Raul’s jokes.  Danneker brings a level of depth to this character, resisting the temptation to play him as simple or naïve.

The production team creates an atmosphere that is simple yet effective in evoking the sights and sounds of baseball.  Andrea Bush’s set includes a large scoreboard that keeps track of the year and city, making it easy to follow the transitions between scenes.  K.D. Schill’s costumes help keep track of the players, too.  The men constantly appear in new uniforms as they are traded between teams.

Overall, the Seattle Public Theater does a good job with a mediocre play.  The witty dialogue and shaky friendships between the three players are entertaining enough to make the show enjoyable for just about anyone.  It does take some degree of interest in baseball, however, to fully appreciate Back Back Back.

Back Back Back.  By Itamar Moses.  Directed by Kelly Kitchens.  Seattle Public Theater at the Bathhouse.  March 29 – April 22.  Tickets and information at 206-524-1300 or www.seattlepublictheater.org.