I AM MY OWN WIFE 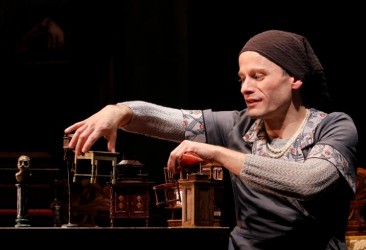 Pictured: Nick Garrison in I Am My Own Wife at Seattle Repertory Theatre. Photo by Chris Bennion.

Doug Wright’s 2003 play I Am My Own Wife is a one-person show about Charlotte Von Mahlsdorf, a German transvestite born Lothar Berfelde who lived in East Berlin under the Nazi and communist regimes.  Although the play has won numerous awards such as the Tony and the Pulitzer Prize, Wright has admitted that composing this piece was not easy.  He was no expert on World War II or German history, and Mahlsdorf’s persona is complicated.  Much of what she claims about her own past—that she was coerced into spying for the Stasi police, that she murdered her own father to save her family from his abuse—is contradicted by official government records.  It was not until a friend advised Wright to concentrate on his own relationship with this “astonishing character” and put aside the sorting of fact from fiction that the play finally came together.[1]  As such, I Am My Own Wife is not a textbook-style recitation of past events but a sharing of a series of experiences between author and subject.  Without much dramatic or narrative intervention, Wright lets Mahlsdorf speak her own stories as he listened to her tell them during his research trips to Berlin.

Wife is very much a play about listening.  An old-fashioned phonograph is set stage right.  It is the first thing Mahlsdorf walks to when she appears onstage.  She explains to us that the phonograph is much more complicated than it appears:  It, like her, consists of multi-gendered parts; for instance, a wooden phonograph horn is used for playing women’s voices and a metal horn is used for playing men’s.  This passing and meeting of opposites and likenesses is another theme of the play, and one that manifests most clearly in the body of the show’s single performer, Nick Garrison.

Garrison’s task is daunting.  As the only actor, he plays Mahlsdorf, Wright, Wright’s friend named John, and every other character that appears in the play.  Garrison’s virtuosity is such that each character is vocally and physically completely different, so much so that you forget only one actor is on the stage.  However, his costuming—a string of pearls, grey house dress, and women’s head scarf and shoes (designed by Erik Andor)—keeps the character of Mahlsdorf almost always in the foreground.  It is her play, and Garrison is exquisite in the role.  His portrayal of Mahlsdorf’s putting on women’s clothing for the first time is wonderfully done—sensual and full of joy;  her recounting of the seconds before she murdered her father is also expertly portrayed but trimmed with coldness and brutality.  Jennifer Zeyl’s set design nicely highlights the opposing motifs of the play as well—a crystal chandelier sparkles against a grey, utilitarian wall that lights up to reveal Mahlsdorf’s collection of antiques (as she is, among many things, the founder and keeper of her own museum).

In director Jerry Manning’s hands, the play flows seamlessly and sincerely—each bit of blocking is purposeful and although there are some nice moments of comedy the play never slips into gimmicks.  For Manning, a central theme is “the question of survival.”  He asks, “What does it take to survive?”[2]  This is clearly expressed throughout the play, too.  As the playwright’s character says to Mahlsdorf, “It is like you are an impossibility.  You shouldn’t even exist.”  And yet Mahlsdorf did, and on her own terms.

[1] “I Am My Own Character,” discussion between Jerry Manning and Doug Wright in play program.