The Seattle Gilbert and Sullivan Society Presents Pirates of Penzance

A classic operatic comedy, The Pirates of Penzance is the latest production from the Seattle Gilbert and Sullivan Society.

Immediately upon walking into the Bagley-Wright theater, I was greeted with a large set piece emulating a 19th century naval map. This large stage provides an ocean of opportunity for creative blocking, and Director Phil Lacey uses it to his full advantage.

Nathanael Fleming is wonderful in his role as Frederic; his stunning voice is the highlight of the show. Anna Galavis impresses as Mabel, who provides some jaw-dropping vocals in an already complex musical. I also must sing praise to Dawn Padula, who consistently evoked uncontrollable laughter from the audience with her role as Ruth. 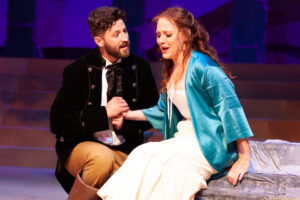 Like many other Gilbert and Sullivan musicals, The Pirates of the Penzance is lyrically dense. Just listening to “I am the very model of a modern Major-General” makes me run out of breath. The ensemble was able to keep up with this tirade of tounge-twisters to an impressive degree; however, individually certain actors seemed slightly unprepared for opening night. This is undoubtedly due to several rehearsals being set back due to COVID-19.

However, some of these issues cannot be blamed purely on the pandemic, and rather they are independent, conscious choices. For instance, the blocking, at times, could be extremely impressive—my mind jumps to when the Major General’s wards enter the stage in a conflict with the pirates. The way the young women brandished their umbrellas was delightfully cartoonish. Yet, every scene used similarly over-the-top presentation to the point of exhausting the cast. This physical demand alongside the already challenging nature of the script, led to some visible onstage confusion. Ultimately, these blocking decisions could have been cut or adapted to work towards the benefit of the actors involved.

Further, while I enjoyed the design of the set, its color choices oversaturated the stage. This unfortunately clashed with the other technical elements of lighting and costuming, which were unable to stand out in front of an already colorful background.

There was clearly an immense amount of passion put into The Pirates of Penzance, and there were undeniable moments of greatness. It is because of this that I believe that these issues will soon be addressed to better focus audiences on the talented actors and singers the Seattle Gilbert and Sullivan Society has available to them. 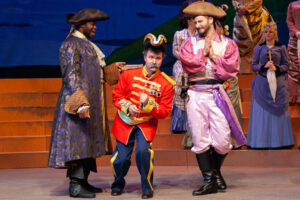 The Seattle Gilbert and Sullivan Society presents The Pirates of the Penzance, from July 15th-31st at the Bagley-Wright Theatre, Seattle

Tickets are available at: https://seattlegilbertandsullivan.com/