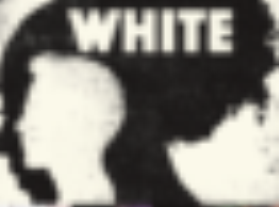 Laughter and comedy are more powerful than diatribes!

Much to my joy and delight Seattle’s venerable Theatre22 is back in action, enlightening us through humor and authenticity. WHITE, by James IJames, opened in repertory, Friday night at 12th Ave Arts, as an exposé of “the ugly reality…of being a non-white commodity, a marketing gimmick, where people, organizations, and corporations prove how woke they are, only to appeal to new generations for popularity and revenues.” said Tayo Talabi, Co-Director.

Due to the outstanding performance and talent of its star Shermona Mitchell, and the incredible dialogue by the author, it was also one of the most hilarious plays I have seen in a long time, although the topic is very serious indeed. Like Molière, it highlighted the absurdity of pretentious attitudes and people, and although highly topical, it spoke to universal themes.

As the play opens, Jane played by Jennifer Ewing, an utterly pretentious art museum curator, spouting nothing but buzz words, explains to her long time college friend, Gus,-a gay white male- played by Tyler Rogers, that she cannot include his recent paintings in her new show, because she wants to cash in on the latest fashion and is searching for “diverse artists” not “white dudes, even if they are gay. In response, he convinces Vanessa, a black actress friend of his Asian partner’s, to pretend to be the painter and enter his paintings in the exhibit, as her own.

Political correctness, buzz words and incredibly funny dialogue ensue, as Vanessa and Gus plot to make it all seem real. One of the best scenes in this masterpiece, was when Gus is explaining his abstract “painting” to the polite but down-to-earth Vanessa. Her facial and physical reactions to his buzz words and artistic rhetoric were uproariously funny. The bewildered Vannessa politely asks simple questions to try to make sense of the incoherent rhetoric and her confusion is apparent just by raising an eyebrow. Shermona Mitchell’s comic timing and ability were nothing short of miraculous. 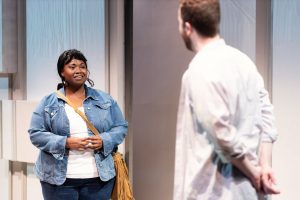 As they create a bio for The Black Woman Artist, they check every box for “otherness,” race, class, gender, sexual orientation, dialect, appellation, personality type and dietary category with glee. Through this the author demonstrates the lengths to which white folks, that is to say the non-other or the norm, will go to market and “commodicize” the “other.”

Although the acting of Shermona Mitchell carried the show, the set design by Parmida Ziaei and Margaret Toomey were highly creative and really did evoke a museum with the chattering classes. Then there was Patrick Swett’s contribution; his costumes for Shermona, both as Gus’s Fairy Godmother and as The Black Woman Artist, Balkonné, the ultimate commodity for the Art Museum crowd. They were nothing short of genius. 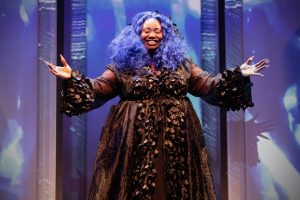 Co-directors Tayor Talabi and Corey McDaniel are to be commended for bringing this play to woke Seattle, where too many people have drunk the Kool-aid for too long and need enlightening.

Get your tickets now, this is show is likely to be sold out!

Here is something from Rafia Zakaria, a writer from the Third World about the topics raised in WHITE

This new ethic of book reviewing is offered up to protect and assist the unprivileged and the marginalized; and, yes, those whose context and cultures may not be easily relatable may require a bit of extra work from the reader. Yet from there the anti-negative book review cadre argues for limitations on all book reviews. Writing a critical review that dares wonder about the writer’s biography, that goes beyond the page into the suggested and imputed, is not only “textual violence” but a tacit endorsement of inequality, of exclusion, and marginalization.
It is a clever sleight of hand, stemming in some part from the predilection toward taking offence on behalf of marginalized others while simultaneously suggesting that a lowering of standards, or in this case a deliberate abridgement of the negative review, is what is required to correct the inequities of under-representation and misinterpretation. This is simply not true; for those who belong to these marginalized categories—and I speak as someone who does—critical and informed engagement with their work, along with dialectical challenges to it, is a sign of equality or inclusion. The idea that all Native American or Muslim American women must be praised for the very fact of publishing a book smacks of the worst sort of condescension; the idea that their public positions must receive gentle pats insures their intellectual exclusion.