It’s one for the money, two for the show at Village Theatre

It was an enchanted night on December 4th, 1956 in Memphis, Tennessee. The planets aligned and four rockstars came together in a dingy recording studio to make some musical magic. It seems like the most fantastical of premises: Elvis Presley, Carl Perkins, Jerry Lee Lewis, and Johnny Cash hanging out and making music. Yet, it is this very real moment in rock and roll history that is on display at Village Theatre in Million Dollar Quartet. 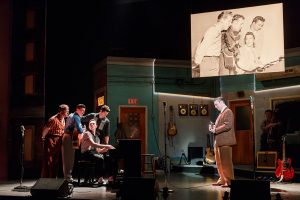 The story begins with the head of Sun Records, Sam Phillips. He serves as the narrator and guide through our story as well as the fulcrum around which all of the musicians revolve. To hear Phillips tell it, Presley, Perkins, Lewis, and Cash owe their starts to him as he produced records for all of them at some point. The first two stars we meet are Jerry Lee Lewis, still mostly unknown and desperate to prove himself, and Carl Perkins the more established entertainer. They have come together to record tracks for Perkins’s newest album. Next to stop by is Johnny Cash. He is currently still with Sun Records however, unbeknownst to Phillips, he has plans to move to Columbia Records as soon as his contract is up. Meanwhile, in moseys Elvis Presley and his girlfriend Dyanne for a visit. He has moved on from Sun Records to RCA (much to chagrin of Phillips). As each character is introduced, there are flashbacks to their humble beginnings and their first encounters with Phillips.

While this show does not boast the deepest and most exciting of plots, it serves the purpose of most jukebox musicals as a vehicle for the songs. For a show like this to work, it takes the most talented and dynamic of casts and that is what is on the stage at Village Theatre in spades. Not only do they all have fantastic voices but they are all seriously skilled on their instruments. John Countryman as Jerry Lee Lewis brings the explosive dynamism of Lewis as a performer into the character. He has a manic and desperate energy that is incredibly compelling. In the role of Carl Perkins is Skye Scott. He is much more tightly wound and focused and plays beautifully off of the crazy Countryman. If you didn’t know from the program that Brian Grey would be playing the role of Johnny Cash, it is evident from his first line that he boasts the signature deep and resonant bass tones synonymous with the country star. Grey brings a very cool and restrained presence which is needed as a respite among the non-stop frenzie of the other performers. Jason Kappus as Elvis has an easy charm that never goes over the line into an impression. His character is always grounded and true and displays the confidence of a man who has found success the others are still reaching for. As the archetypal girlfriend Dyanne is Cayman Ilika. She is sexy and delightful and makes it clear she can blow the roof off of the place. Though her character is severely underserved by the book, Ilika makes the most of what she is given. Rounding out this eclectic and motley crew is Matt Wade as Sam Phillips. Wade manages to come across as charismatic and stay engaging which is quite a feat considering the book gives him little more to do than act as an exposition machine.

Million Dollar Quartet is a fast, lively, and extremely fun night at the theater. There is a reason audiences have been clamoring for the show to return home to Village Theatre where it was originally conceived. Each of the four musicians is able to stay completely true to the distinct styles of their characters but they all come together to make a whole better even than the sum of its parts. By the time the show gives in and becomes a straight up concert, the audience was on their feet shakin’ it with all they had.

Million Dollar Quartet is playing in Issaquah at the Francis J. Gaudette Theatre through June 23rd. It will be at the Everett Performing Arts Center from June 28 – July 28. For tickets and more information, visit https://www.villagetheatre.org/.