For those not yet acquainted with Dukesbay Productions, a brief introduction. Conceived and dedicated to the belief that theater should be a montage of styles and a rainbow of colors, Dukesbay shines a light on what is right, and what is wrong, with the popular perception of community theater. Dukesbay is a company that plays in a small space but plays there with big ideas. Known for both its laugh out loud Java Tacoma series and it’s deep and moving dramatic shows, Dukesbay is valuable for its vision and the high quality shows it puts on stage. In short, for those not yet acquainted with Dukesbay Productions, it is past time to rectify that hole in your cultural being.

This weekend, Dukesbay opened “Yohen.” Written by Philip Kan Gotanda and directed by Dukesbay co-founder Randy Clark, “Yohen” tells many stories in one, seemingly simple, tale. Is it another winner for the folks who inhabit the Merlino Arts Center in downtown T-Town? It is, indeed. 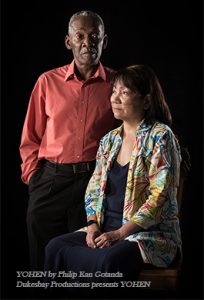 Two people are in the cast, but the range they travel in this show makes it feel like there are a half dozen people in the cast. The other member of the Dukesbay founding team, Aya Hashiguchi plays Sumi Washington. Her not entirely estranged husband James is played by Malcolm J. West. Ms. Hashiguchi and Mr. West are not a couple off the stage. But, they could be in ways both heartwarming and heartbreaking.

The term “Yohen” is an artistic term meaning pottery that acquires its character from chance events in the kiln. In fact, Mr. Gotanda apprenticed with a Japanese potter while in his early 20s. As it turns out, the Washingtons have been changed over time. Some events were by chance, but others were the result of choices this complex couple made.

The appreciative audience for Dukesbay’s show is taken on a journey of change in their perception of what is going on in front of it. At first, Sumi and James appear to be acting out a typical wife aggrieved by her lout of a husband show. Enjoyable, to be sure, but also something we have seen on “King of Queens,” “Everybody Loves Raymond,” and countless other forgettable TV shows. However, then a shift takes place and Yohen takes a different tack. Perhaps not everything is black and white. Maybe, both people are in the right and both in the wrong, sometimes simultaneously. Now we have drama as seen in real life. Now, we have a community theater show that compels us to think. Dukesbay is at its best as a conduit for thought.

Ms. Hashiguchi has practiced her stagecraft for Dukesbay many times, but most often in a supporting role. Wry wit and wisdom is her usual stock in trade. As Sumi, Ms. Clark is happy, angry, playful, lonely, lusty, confused, and, yes, aggrieved. That’s a lot to be in 90 minutes, but Aya Hashiguchi is up to every facet of Sumi’s personality. You see, Sumi is unsure about…well, everything. In love with her husband, while being bored silly by him and desiring him to slay her inner demons, Sumi’s life is hard. It is safe to say that no actress in the South Sound would have hit the right notes any more accurately than does Aya Hashiguchi. One hopes she is able and willing, to take another lead role in the future.

Drama in the Hood makes no bones about Dukesbay as one of the theaters we like to support and encourage along the way, but perhaps this time even more so. The proceeds from this show are in support of The Bryant Neighborhood Center at Trinity Presbyterian Church. What a wonderful cause for an area of town that was down and out and is fighting back with spirit and vision.

So, should you come to see “Yohen?” Of course! Should you come early? Yes, and for two reasons. The Dukesbay Theater only holds about 40 patrons and you don’t want to miss out. Also, you want to be early enough to hear Randy Clark’s curtain speech. It will take you to the Principal’s office at your grade school, but stop just short of showing you the paddle. It’s always a treat. For those reasons, as well as in support of deserving people, plan to see “Yohen.”