In the continuing celebration of its 100th season, Tacoma Little Theatre is revisiting shows it has produced over its long history. This weekend, TLT opened “Bell, Book, and Candle. The original work was a book by John Van Druten, but moviegoers of a certain age will likely remember it as a James Stewart movie that came out in 1958. It is a sweet story, with just the smallest touch of Halloween “Boo,” reminiscent of “Bewitched,” more than anything truly scary. As usual for a show at Tacoma Little Theatre, it is long on dialogue and short on any real action. That isn’t a criticism. Chris Serface puts on shows at his theater that show off the dramatic verbal skills of his actors, and it is always a pleasure to watch, and hear, them as they use the spoken word to work out the plot of the show.

In “Bell, Book, and Candle” (which, in real life, is an excommunication technique formerly used by the Catholic Church), Gillian Holroyd falls in love with Shepherd Henderson, who happens to be a tenant in Ms. Holroyd’s apartment building. Rather than using her female charms, Ms. Holroyd puts her witchcraft skills to work, compelling him to fall immediately and completely in love with her. 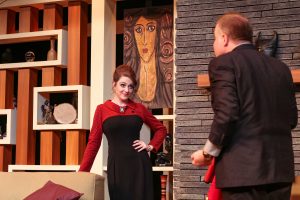 The role of Gillian is played by newcomer to the area Victoria Ashley, who moves seductively, purring in a way to make Shepherd fall for her without needing spells with which to do so. But, since she’s a witch and can, she seduces him with her powers. The South Sound is blessed by a number of Joint Base Lewis/McChord family members who grace the stage here. Ms. Ashley is another welcome addition to that family and the South Sound Theater family.

Veteran actor Jed Slaughter plays the Jimmy Stewart role and readily falls for his bewitching landlady. Mr. Slaughter is particularly adept at Tacoma Little Theatre’s dialogue-heavy shows and turns in another fine outing in “Bell, Book, and Candle.” He succumbs to Gillian without using campy, glazed eye techniques. Instead, his portrayal of a man under a spell feels real. He is a valuable member of each and every show that casts him, and Director Brett Carr made an excellent choice for his Shepherd.

Max Christofferson and Mike Storslee play Gillian’s brother Nicky, and author on all things paranormal Sidney Redlitch respectively. They support the action well, and Nicky’s annoying habit of dropping his coat on the floor shows off his lack of concern for anyone other than himself. Sidney is quite overwhelmed by Gillian and Mr. Storslee quails adroitly.

Wendy Cohen, as Aunt Queenie is a gem. She fairly wrings her hands at the chance to help participate in the chants and incantations. Ms. Cohen is a prominent player at several Puget Sound-area theaters and is always really good. “Bell, Book, and Candle” is certainly no exception.

The folks who attend this show will experience a good cast in an excellent show. But, they will also experience something else that makes this show special. The Blake York set is magnificent. Mr. York has a way with set construction that makes the theater-goer believe a living room is a room to be lived in, rather than plywood and temporary fixtures. The solidity of the set is just one more reason to see this production.

It is a pleasure to help Tacoma Little Theater continue the year-long celebration of its Centennial season, and Drama in the Hood recommends the season to everyone who cares about community theater. We also recommend this show as a stand-alone if necessary. It is a throwback to a Golden Age, populated by a really strong cast on a set worthy of Broadway.