When the comedy/musical/romance “Little Shop of Horrors” was released in 1986 it became an instant sensation. It was unlike anything else released in those buttoned-down times. To those who hadn’t stayed up late to watch him on Second City, it was the coming-out party for Rick Moranis in his signature nebbishy persona. It featured Skid Row as a supporting character. Without a true hero “Little Shop” featured flawed folks and a voracious singing plant. In short, this thing was…different. It has since become a cult classic on the lines of Rocky Horror. Little wonder, then, that Lakewood Playhouse would finish its 79th season with this show since it opened last season with Rocky, Frank and the whole Rocky Horror gang.

Fans of the film will find much to recognize in Lakewood Playhouse’s presentation. Seymour is a poor schlub, trapped by a dead-end job in a failing flower shop. He happens on an exotic plant with bad intentions. Seymour parlays horticultural fame into the confidence to rescue the girl of his dreams from the man of her nightmares. Just as happily ever after is within Seymour’s grasp, a Dystopian karma with a catchy musical denouement derails the dream.

Niclas Olson takes on the Moranis character in this show and is great from head to toe. Not only is he an excellent singer, but he has the Seymour Kelbhorn shamble down to a tee. Seymour couldn’t catch a break if he had a basket the size of Mt. Rainier. The idea that someone as snazzy (this show brings out words like “snazzy”) as Audrey would give him a second look is the stuff of fantasy. Mr. Olson brings all of that to the part and is generous to his co-performers. This is his finest on-stage performance in recent memory. 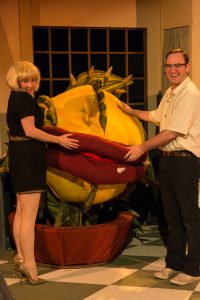 U.K. native Jennifer Redston plays Audrey. Leaving any trace of British accent long behind her, she adopts a voice that is long on Brooklyn and even longer on nasal. She is utterly consistent with the voice she adopts. To sing in accent is a stage gift, and Ms. Redston, along with Nic Olson, turn this musical into an auditory treat. The two share honors as the best voices in this show. Like Sydney Safford, who interpreted this role for Paradise Theatre last year, Jennifer Redston draws out the affection of an audience who forgives her for her past and roots for her to escape her life, building something new with a great guy. Lakewood Playhouse audiences look forward to hearing again from this fine actor.

Stealing the movie in the relatively small role of madman/dentist Orin Scrivello was Steve Martin. In LPH’s production, the sadistic dentist is played by Will Johnson. Mr. Johnson is pretty good as Scrivello DDS. But, after intermission, Mr. Johnson chews the scenery in the successive roles as Bernstein, Luce, Snip, and Martin. He prances about the stage, pushing the narrative about Seymour and his plant to hilarious effect! The audience roared its approval of Johnson’s madcap stage behavior and the loud response he received during the curtain call was well-deserved. Under the direction of visiting showrunner Chris Serface, Will Johnson was a true show highlight in roles that didn’t last three minutes apiece. Outstanding work!

One of the kitschy elements to “Little Shop of Horrors” is the doo-wop musical narration by Chiffon, Cryystal, and Ronnette, played in this show by Joelle Craft, Antoinette Nicole Bridges, and Brittany Griffins respectively. While their dance moves weren’t always on point in terms of teamwork, these three added value through narrative song. They were at their best in the clever “Da-Doo,” in the shows first act. Of the three, Ms. Griffins put forth the strongest performance.

“Little Shop of Horrors” is a play that rises or falls on the work of a vast team, not all of them on stage and visible. Audrey II is manned by James Wrede and voiced by Eric Clausell, both of whom did a wonderful job. Particularly in Act Two, Mr. Wrede had Audrey II’s mouth synced with Clausell’s voice after a few struggles in that regard during Act One.

Costuming and set dressing are more important in this show than in most. To that end, credit Blayne Fujita and crew, along with the work of Karrie Morrison and Jeffery Swiney-Weaver for inviting the audience to fully engage.

The Little Shop Band is Zachary Kellogg, LaMont Atkinson, James Vincent Sloan and Joseph Ralston. Excellent instrumental work by those four. A live band is so crucial to a good musical and these four were on point.

Finally, a word about the improvements to Lakewood Playhouse, in general. This is Managing Artistic Director John Munn’s seventh season at the helm and his finest in terms of facility improvement. Through the power of his personality and dogged perseverance, Mr. Munn and the Lakewood Playhouse Board raised the money to make a huge difference in how an audience sees and hears a show at the 50+-year-old facility. The new microphones are a huge improvement. The New LED lights make the actors crackle from a visual standpoint. The upstairs bathrooms have gone from, um, not great, to really good! Lakewood Playhouse, always a place for a good night at the theater, has her finery on now. How often have we said, “Go to the play and check out the bathrooms.” Never, until now.

The folks who make up LPH are excited about their 80th season and for good reason. It is a fine slate of shows. But, they didn’t look past the last show of their 79th season. “Little Shop of Horrors” is a good night out. Tickets are selling like flowers at a funeral. Get yours today.