In Love with Shakespeare in Love 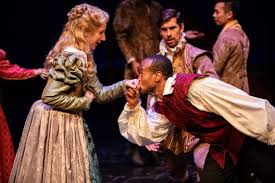 The Language is the Thing

The real stars of Seattle Shakespeare Company’s current production of Shakespeare in Love, the stage adaptation of the 1998 Tom Stoppard Marc Norman movie of the same name, are actually the set designer Craig B. Wollam and George Mount, the director.

Movies adapted for the stage are notoriously difficult to direct because movies have so many short scenes with set changes, which plays generally do not. Craig B. Wollam designed a moveable set in three pieces, which functioned well for ALL 54 SCENES. The different sets included: a bedroom, balconies, ballrooms, audience rooms in a palace, the stage as well as the backstage of a theatre, street scenes and Will Shakespeare’s study.

Director George Mount managed the nearly impossible difficult task of moving the actors and set pieces fluidly with musical accompaniment. Consequently, the action flowed as seamlessly as if it were a movie or indeed an inspirational dream bubbling up in the creative fluid of the author’s brain. Additionally, he chose to stage the play in the Cornish Playhouse, rather than in the smaller Center House theatre, thereby accommodating the large cast and set pieces. The high ceiling suggested that Shakespeare’s imaginative genius was as vast as the space above the set pieces. .

For those who have not seen the movie, Shakespeare in Love, recounts a love affair between the young actor/playwright Will Shakespeare, while he is experiencing a writer’s block. Like Romeo and Juliet, it involves forbidden love divided by arranged marriages, socio-economic differential and of course Shakespeare’s legal but ambiguous marital status.

A host of historical characters from the historically important and fertile theatre scene of London’s late 16th century inhabit the play, Richard Burbage, one of the first great theatrical stars, Ned Alleyn, another great actor, Queen Elizabeth I, a great patron of the arts, Shakespeare’s fellow playwright and rival, Christopher Marlowe. A young macabre John Webster, makes an appearance, foreshadowing his dark and violent plays.

Interwoven into the plot are some of the difficulties of theatrical life at that time: censorship by the crown, legal restrictions for women acting in the theatre, the precariousness of profits and vicissitudes of adolescent boy’s voices. Much of the dialogue is lifted right out of Shakespeare’s play, so it is an uproariously funny script.

One of the highlights of this production was the brilliant recorded lute music composed by Paddy Cunneen for the original West End Production. Not only was it authentic, and sounded live, but it also filled the time during the set changes, and provided music for the dance numbers. Andrew Murray’s choreography was inspired; it was both innovative but actually in keeping with traditional Renaissance style of dancing.

In terms of acting, the stand-outs were Suzanne Bouchard as Queen Elizabeth, whose commanding presence and voice dominated the stage, Chris Ensweiler as Edmund Tilner/Sir Robert de Lesseps, Saxton Jay Walker as Ned Alleyn and Arlando Smith as Robin and a few other roles.

Although Rafael Jordon as Will Shakespeare was reasonably good, his diction was splashy, so some of his lines were incomprehensible and he did not quite have a commanding voice, a necessary pre-requisite for the role. It would have elevated his performance from good to great. Some of the other actors, such as MJ Sieber, who played Richard Burbage also spoke indistinctly and from the back of their throats. With such superb direction, music and technical effects, one would hope for better vocal production.

All in all, this was a great show!!!! I loved the movie when it came out 20 years ago. I have seen it several times on DVD, but I would say that this production of Shakespeare in Love was not a lesser imitation of the film version, but rather it elevated the script. The production demonstrated the old saying in theatre “Less is more”

Since it was live and the staging was simple, it was more like the staging of a play in Shakespeare’s time. In those days, they did not even have lighting or any special effects. The language was the thing, and it was magical. George Mount’s production reproduced that magic. Go see it even if the weather is spectacular.