Written by the award-winning MacArthur “Genius” playwright Taylor Mac, Hir opened February 28th at ArtsWest Theatre in West Seattle.  Jennifer Zeyl, the incumbent Artistic Director of the Intiman Theatre takes the reigns and directs a talented cast, each making their ArtsWest debut in this genre-defying narrative.  When Isaac returns home from the wars overseas, his arrival is unexpectedly complicated by the state of the family.  His mother Paige, suddenly liberated from years of a toxic marriage, has had an epiphany and now demonstrates her intent to dismantle the patriarchy with help from Isaac’s recently out transgender sibling Max.  But as Paige and Isaac vie for control of the household, the fate of the family home hangs in the balance and they are forced to question the viability of a future that is free from the past.

A production aided by a cultural advisory committee, Hir tackles such hard-hitting contemporary issues as gender violence, gender identity and the omission of queer history from heteronormative society, and post-traumatic stress in veterans.  Though these are frequently addressed to varying lengths throughout the performance, obviously the biggest contemporary issue raised is the continued oppression of marginalized groups via systems of institutional violence.  Accordingly, Hir focuses most intently on the ongoing struggle by women and minority groups to seize power for themselves, thereby gaining the equal recognition and treatment they deserve.

Likely recognizable from her roles in My Fair Lady and A Great Wilderness at Village Theater and Seattle Repertory Theatre, respectively, Gretchen Krich plays Paige, a mother and wife with a second chance and the determination to deconstruct the oppressive male forces that exploited her for so long.  Before the first act even officially begins, Paige and her disabled husband Arnold (Charles Leggett) occupy the stage, filling out the world of the play and making it that much more immersive by showing Paige’s mundane behavior.

When Isaac, played by Evan Barrett, finally arrives home he’s shocked to see the house in disrepair and littered with dirty laundry and garbage and he’s equally horrified to find his father dressed like a clown and humiliated by his mother.  Isaac’s abrasive attitude over the state of the family doesn’t sit well with Paige, but she nonetheless explains the awakening she’s had after Arnold’s debilitating stroke left him crippled and unable to intelligibly speak. As Paige giddily informs Isaac of his sibling Max’s recently revealed transgender identity.  Delivering him a crash course in new gender pronouns like “ze” and “hir,” Paige announces her ferocious opposition to the patriarchy and institutionalized forms of discrimination, and Isaac promptly demands that the house be returned to order.

But when Max enters, played by the incomparable Adrian Kljucec, Isaac’s reaction to seeing hir for the first time heightens tensions as Max levels accusations at hir brother for being unsupportive.  As more family drama ensues in the first act, many shocking revelations are made about the various characters that touch on themes of gender violence, drug addiction, post-traumatic stress, and institutional oppression.  And though Paige and Max try to convince Isaac to join them at a museum outing, he opts to stay with Arnold.  Before ze leaves, Max warns Isaac to catch up with the progressing world or he risks being left behind.  Paige issues a warning the house is not to be cleaned in her absence.

But the limits of Isaac’s obedience are tested, and the fallout between the family members in Act Two is a true spectacle.  In the moments leading up to the explosive climax, Isaac and Arnold raise questions of violence inherent to masculinity, Max wrestles with Paige’s blind appropriation of hir anti-culture, and the matriarch herself must decide between her family or continuing her fight to dismantle a suffocating patriarchal society.  In a conclusion that examines the interconnectivity of gender and power and questions the viability of any solution that doesn’t totally annihilate the past, there might not be a happy answer.

Immersive and painstakingly detailed, co-scenic designers Julia Welch and Timothy White Eagle produce a truly impressive set piece consisting of a kitchen and living room.  In the first act, the stage might resemble the home of a hoarder, with bags of garbage, dirty laundry, and unwashed dishes occupying everything from the floor, to furniture, to cupboards, to counter space.  Though a television sits among the other furniture, it remains unused, unlike the blender Paige keeps plugged in to blend Arnold’s smoothies.  Little spaces intended for seating appear to be carved out of the mountains of trash and linens on the couch and other chairs, and a literal pile of a table and chairs blocks the front door.  Framed through the house’s poorly-maintained windows are the leaves of shrubs and trees, and several holes in the interior walls are mostly hidden from view when furniture or artwork isn’t strategically positioned to hide the damage.  During intermission, the stage is cleaned to resemble a recently tidied home and the furniture is rearranged according to societal expectations, inciting Paige’s wrath.

Sound Designer Matt Starritt handles this production, with audio effects ranging from the twitter of birds outside to various vehicular noises, though perhaps the most cohesive use of sound comes during the intermission.  If you remain in the theatre during this time, it’s relatively apparent that the music on Isaac’s headphones at the end of Act One and the start of Act Two sync with the songs that begin and end the intermission.  By essentially subjecting the audience to the same music as Isaac, Starritt cleverly and subtly keeps us within the world of the play.

Costumes were designed by Pete Rush, and perhaps as should be expected in a play about gender, clothing plays a significant role in visually representing power.  Paige wears pants to demonstrate her assumption to power in the home while Arnold first appears wearing clown makeup and a wig, dressed in a stained pink nightgown.  Clearly, the reversal of gender roles in the house is symbolically represented by the clothes in which the characters dress themselves, while the clown outfit adds a whole other layer to the ridicule of paternal power.  Isaac, despite his discharge from the military, wears parts of his uniform because he identifies with the hypermasculine figure of a soldier.  By comparison, Max wears tight pants and a tank top because ze is taking testosterone injections and wants to show hir developing musculature.  And near the climax, when Paige breaks out the wigs and gowns in an attempt to undermine her son’s masculine attempts at establishing household dominance, Max and Arnold both show enthusiasm for the opportunity to crossdress, drawing attention to their new gender-bending identities that appear in stark contrast to Isaac’s heteronormative, traditionalist understanding of home, despite his best efforts to be otherwise accepting.

Hir remains an emotionally charged narrative, tackling contemporary issues like discrimination against gender fluid peoples and the continued existence of a patriarchal paradigm, the likes of which the play decries should have been dismantled long ago.  Advertised as a comedy but so much more complex and tragic than that, this narrative is supercharged with anger at lifelong patronization, dehumanization, and the ignored mental tolls imposed upon an impoverished generation forced into employment by the nation’s military industrial complex due to their parents’ economic circumstances.  And in an explosive finale, all elements of the performance masterfully assemble and attempt to answer if there’s any way to forge a new future that doesn’t totally annihilate our past.

Hir, written by Taylor Mac and produced by Arts West and Intiman Theatre. Showing at Arts West Theatre, 4711 California Ave SW Seattle, WA 98116. Located in West Seattle at the corner of Alaska St. and California Ave. Feb 28th to Mar 25th Thurs through Sat @ 7:30pm and Sun @ 3:00pm.  Tickets range from $17 to $38 and are available online at www.artswest.org/theatre/buy-tickets/, or call (206)-938-0339. Additional info is available at www.artswest.org.

All photo credit to John McLellan. 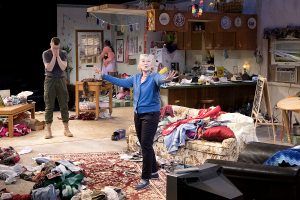 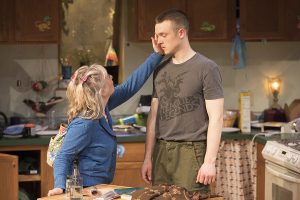