They did it their way 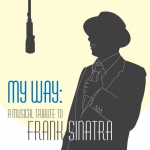 An evening with Sinatra at the Tacoma Musical Playhouse

The Tacoma Musical Playhouse saw a crowded lobby and a full house on the opening night of “My Way: A Musical Tribute to Frank Sinatra.” Complete with themed cocktails, the ambiance of the theater recalled a classy evening of jazz in 1960’s Chicago or New York.
In case the program and the opening remarks don’t make it clear enough, this is not a show where eight performers compete to do the Sinatra impression. In the words of the show’s original producer, the purpose of “My Way” is to “recall the essence of the man through the glorious music he sang.”
The show is oodles of toe-tapping fun. The cast and direction perfectly pair tongue-in-cheek cheese with the genuine emotion of Sinatra’s music, and the music is accompanied by fun dancing and easy banter between the eight singers.
Unfortunately, the space and the sound system didn’t do the singers any favors. It’s an ambitious undertaking to seamlessly blend soloists who all have their own microphones, and the single direction speakers did very little to carry their sound through the theater. Most singers and directors worth their salt know that two voices singing unison is one of the toughest feats to master, and yet this production called for exactly that on multiple occasions, forcing the performers into long, musically challenging phrases where every tiny slip stuck out like a sore thumb. As a born-and-raised choir nerd, I judge these types of mistakes more harshly than most, but the audience at large could hear them as well.
The set was fabulous yet simply, a 40’s style bar/restaurant that added a dynamic element to the numerous medleys, but the onstage success was not mirrored by the lighting production. The mood lighting was simplistic, the spotlight cues were slow and missed the performers on more than one occasion, and there was an entire medley where the spotlight hit only the top of the actors’ heads, making them look more like they should be telling a ghost story at summer camp than performing a heartfelt song about Frank Sinatra’s internal struggles.
That said, one of the production’s definite strengths was the care they took in acknowledging all parts of Sinatra’s life in a (pardon the pun) frank and honest manner. Between the medleys, actors took turns telling anecdotes about Sinatra’s life, both well-known and obscure, creating a three-dimensional portrait of the departed legend.
It was abundantly clear to me that the audience deeply enjoyed the show, and my favorite part of the night was when my grandmother turned to me, a broad smile on her face, and whispered, “Gosh, that brings back memories,” after hearing “Fly Me to the Moon.”
Regardless of the clunky production, this show is as cheesy as it is fun, and definitely an enjoyable night out if you are willing to shell out $31 for a seat. Also, allow a couple minutes if you’re ordering tickets online, as the website is less user-friendly than you might hope. At the risk of quoting Sinatra, when it comes to this show, “once is enough.”
My Way runs through Feb. 25. Fri/Sat 7:30 p.m., with a 2:00 pm matinees Feb 4, 17, 24, 25. For more ticket information call 253-565-6867 or email . Tacoma Musical Playhouse 7116 6th Ave, Tacoma, WA 98406