You Are Right If You Think at Theatre 9/12 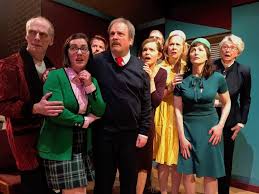 Luigi Pirandello had an immense influence in Europe with his existential dramas and musings. In 1917 he produced Cosi e (se vi pare) setting forth an argument rejecting the acceptance of an agreed upon objective reality. In years that followed this play and the more famous Six Characters in Search of an Author, writers like TS Elliot, Samuel Beckett, Jean-Paul Sartre and Albert Camus would revisit some of the same themes boldly set forth by the freethinking Sicilian writer. Theatre 9/12 leader Charles Waxberg has adapted and directed a thought provoking new production based on Cosi e (se vi pare) entitled You Are Right, If You Think. Here ideas concerning the nature of truth and the importance of respecting our basic humanity and individualism are handled within a dramatic mystery befalling a small seaside community. Waxberg’s troop lays out the tale with admirable focus and skill.

Michael Oaks, a 9/12 regular, assumes the role of our eccentric host, Uncle Leon.  He embodies a rather jaundiced view of his socially successful  brother-in-law and sister, Frank and Grace (an intensely earnest Michael Ramquist and Lisa Carswell). The two seem to be climbing up the rungs of society by steadfastly following the rules they perceive as binding tenets. In an amusing bit of dialogue repeated through act one, they constantly  tutor their daughter (Zandi Carlson) on what is a truth and what is only a metaphor. These lessons subtly introduce some key thoughts of the play.  Can a society always agree upon what should be accepted as  basic truths?  Can a collection of accepted basic facts lead us all to a better understanding of reality?   The theater’s concession stand has fun with this motif by offering “Metaphor Cookies” at intermission.

Pirandello embeds these existential arguments within an entertaining drawing room comedy/mystery filled with an assortment of eccentric characters. Meredith Binder seems to be having a good deal of fun portraying Cynthia—but call her Cini—a nosy secretary. Margaret Bicknell is quite charming as the well-intentioned mayor of the community. Benjamin Nickols plays a dogmatic lawyer named Mr. Kleimer. He and his fellow villagers are consumed with getting to the bottom of the story concerning a mysterious new family. The Ponzis had to recently move to their town, fleeing a devastating flood that destroyed most of the familiy’s possessions.

The community has gotten to know Mr. Ponzi (Eric Smiley) who has begun working with Frank in town. They have also become acquainted with Mr. Ponzi’s mother-in-law Mrs. Skellton (Mary Murfin-Bayley doing splendid work here.) The mystery involves Mrs. Skellton’s daughter who no one has laid eyes on. Mr. Ponzi claims she has died; his mother-in-law claims she is very much alive but estranged from her husband. The township and we are left with baffling mysteries. Who is alive and who is dead? Who is crazy and who is sane? Uncle Leon, seemingly a spokesperson for the playwright declaims that “We don’t want imagination, we want the truth.” He reminds the town folks that perhaps the only truth is what you believe.

The important underlying theme that emerges in the play’s final acts is all this clamoring for answers is finally dehumanizing. Leon laments “People don’t care what the answer is as long as there is an answer.” Pirandello shows how the relentless search for quantifying labels and truth ignores and negates the subtle varieties that make up the many qualities that make each of us human.

The author is able to turn the traditional dramatic mystery form on its ear with the play’s dénouement in which the township demands sworn testimony to “clear things up.” Here Laura Bannister does solid work as the mysterious Lady in Black.

Waxberg has created Theatre 9/12 to offer trained and working actors a venue in which they may sharpen their skills through workshops and performances. They continually offer wonderfully entertaining shows to our community. You Are Right, If You Think is yet another gift bestowed to Seattle from this talented organization.

The show runs through February 25th at the Trinity Church at the bottom of Capitol Hill, 609 8th Ave. Free parking is available. For more information call 206-332-7908 or go to https://www.theatre912.com