Laura Eason’s Sex with Strangers has a solid Seattle Premiere in the capable hands of director David Hsieh of ReAct Theatre. This is ReAct’s first show at 12th Avenue Arts on Capitol Hill.

Hsieh has apparently a lucky hand to be the first to bring this 2009 play here as this play’s themes resonate across several local communities. The play ponders questions about internet technology versus old school paper books in our outerworld.  Deeper questions reflect tensions within and between writers as they cope with feeling under-appreciated versus over-hyped for the wrong reasons and their impacts on our innerworlds.

This play has one audience among the many people working in tech, and another among the many writers and their readers who fill the Seattle Arts & Lectures talks and populate all those classes at Hugo House.

Before I forget, yes, there’s some suggestion of sex which in a movie would be handled as fade outs. The sex punctuates the sparring between Olivia (Alissa Cattabriga), a skillful writer who has yet to find her audience and whose only published novel suffered the fate of having too few yet decidedly mixed reviews. She’s alone at an AirBnB in Michigan set-up for writers and working on the final touches of her next novel. Her solitude is lost when Ethan Strange (Aaron Cammack) arrives in the dark after hazarding a snow storm in a rental car. Turns our Ethan is behind on the movie script being made about his best-selling books. 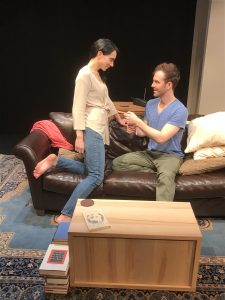 Olivia and Ethan are about as far as possible two souls can sit on the success wheel-of-fortune and still be on speaking terms. That first snow-bound evening they conveniently are left to entertain themselves because the wi-fi is down. Turns out that Ethan knows far more about Olivia than the other way around. He had also read her novel on the advice of their common mentor and really liked it. In fact, he claims to have read it twice, something he claims he never does.

The “girls,” in turn, began to read the blogs and respond with blogs of their own about their encounters with him. He parlayed all of that into a book (Sex with Strangers) and a sequel. Olivia guessed it—More Sex with Strangers—and the two works kept Ethan on the New York Times bestseller list for five years. The book was optioned for a movie, and thus he had to get away to complete the script. Or so he claimed, though he seemed more intent on seduction than writing.

All of this talk about reputation and success is some type of foreplay, apparently, for when Ethan begins to quote her novel to her she allows herself to be seduced by this self-described asshole. Many scenes end with them setting aside their differences and making out. Just why Olivia succumbs enters the realm of “willing suspension of disbelief.”

Olivia had discovered, as many writers and other artists discover, that withstanding the critical comments of strangers about their work requires a level of fortitude and self-confidence they lack. She needed affirmation and someone to front for her. Ethan with his skills at reading a woman’s needs intuits how to play that role.

Ethan is also working on a novel. Having found immediate success of sorts  he wants to use that as a launching pad for his serious efforts.

Both live characters show far more protection of their current projects than protecting themselves from sexually transmitted infections, unwanted pregnancies, or emotionally entangling with someone who is far from ideal as ones relationship partner.

There’s a third “character” that Olivia and Ethan are hoping can be seduced—that wild, unruly, elusive positive public response. As Eason said in an interview: “There’s this public discourse that happens, this, public but also sort of anonymous discourse that can be really damaging!” It can also be wildly affirming. But how much power should the characters grant it for how they think of themselves?

At the end of Act 1, the tensions are too great and they part company. The question in Act 2 is can this pair repair enough of the wounding they have inflicted upon each other to have a future together.

Alissa Cattabriga as Olivia brings a sense that criticism really cuts into her, especially in the scenes where she discusses the pans of her first book and listens to online criticisms after Ethan republishes it.

Aaron Cammack as Ethan Strange opens up the play definitely fueled by a high percentage of the asshole side of the character’s personality. He manages by his actions and demeanor to never completely seem ready for a different life with a commitment to monogamy and Olivia. Which is true to how the character is written. One reviewer of a production in Hollywood suspected Strange is based on Tucker Max, author of I Hope they Serve Beer in Hell. Makes sense, he’s based in Chicago as are Eason and this play.