Bring Down the House, Part 1: Throne of Treachery

A country on the cusp of a new era. A polarized political system, with scheming and selfishness pushing things to the point of no return. Seattle Shakespeare Company’s Bring Down the House, Part 1: Throne of Treachery mixes political intrigue and personal ambition in a gripping adaption of Shakespeare’s Henry VI trilogy.

Henry VI, Part 1, Part 2, and Part 3 may have established Shakespeare’s reputation with their original audiences, but these plays are relatively unpopular today. Performing a trilogy of Shakespearean historical drama would be a serious logistical and artistic challenge for any theater company. Henry VI requires a large ensemble and a clear understanding of the complicated War of the Roses. Plus, Part 1 is widely considered Shakespeare’s weakest play, but the rest of the trilogy doesn’t make sense without it. 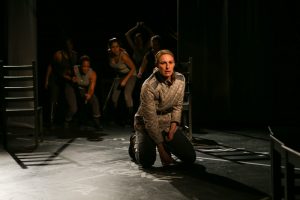 Bring Down the House, Rosa Joshi and Kate Wisniewski’s adaption of Henry VI, highlights the strengths of the trilogy, and minimizes its weaknesses. Part 1: Throne of Treachery focuses on the divisions within the English court that lead to the War of the Roses. After the death of Henry V, the noble families of York and Lancaster become increasingly polarized, until the scheming and selfishness builds to a battle for the throne. Joshi and Wisniewski effectively streamline the dense plot and shine light on strong characters, leaving the audience both moved, and eagerly anticipating Part 2: Crusade of Chaos.

The production benefits from Joshi’s clear, powerful direction. The War of the Roses is a messy part of English history, especially with so few different first names amongst so many players, but Joshi makes sure the families, factions, and characters remain distinct. In Bring Down the House, the personal and political mix in complex ways, but navigating the mire of the English court is always entertaining and engaging for the audience, rather than confusing.

This production also boasts a powerhouse, all-female ensemble cast, who never fail to bring the story and characters to life. Betsy Schwartz inspires pity and hope as the naive new King Henry. Mari Nelson is charismatic and menacing as the Duke of York, with some wonderful Shakespearean villain soliloquies. Kate Sumpter cuts a dashing, Lancelot-type figure as Suffolk, in one of the play’s most charming and most traditionally masculine performances. Marianne Owen, added to the cast the week before opening night after an actor injury, still delivers one of the show’s most nuanced and compelling performance as Humphrey. Sunam Ellis is another standout as Eleanor, Humphrey’s secretly ambitious wife, and masterfully handles some of the play’s most intense, tragic material. 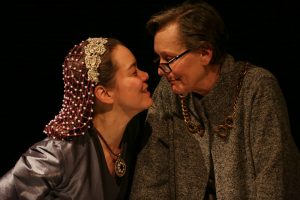 The strong performances and script are mostly complimented by Bring Down the House’s technical aspects. Shawn Ketchum Johnson’s minimal, effective set design sets a tone as soon as audience members walk in the theater, and starts some conversations. Christine Tschirg’s part-period, part-contemporary costume design serves the storytelling style, and score the show some style points. The Taiko drumming, written by William Satake Blauvelt, is powerful and memorable, but so much so that other parts of the score come off as cheesy. The same can be said of the less realistic choreography moments. However, overall the design and technical elements of this play serve the story and characters well, and improve the audience’s theater experience.

Seattle Shakespeare Company’s Bring Down the House, Part 1: Throne of Treachery, is exciting, enlightening, and impressive. It plays to the strengths of Shakespeare’s Henry VI trilogy, and features some of the strongest performances you’re likely to see in Seattle this season. If you have the money and can make the time to see both parts, I highly recommend Bring Down the House. I know I’m excited to see what happens in Part 2 when it opens this upcoming weekend.