More Fun than Trick or Treating in the Rain 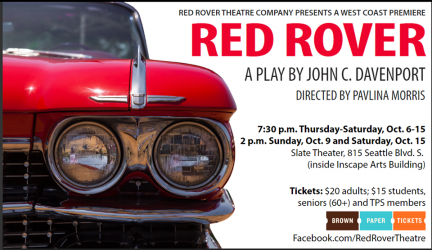 In their first production, the Red Rover Theatre Company presents “Red Rover” written by John C. Davenport, the story of four 30-year-old men in 1983 reminiscing about their old day’s in high school, most doing so unwillingly with the exception of Dennis.
Played by Tedd Saint-James, Dennis drags his three old high school buddies in his rusty red convertible through their dilapidated town in a tour of weather-beaten places they used to visit as kids. Although the four never formed a group and only hung around Dennis individually, Dennis figures they can put any old animosities behind them and just enjoy the night.
But their evening is far from perfect.

This Seattle Repertory Theatre production of A Raisin in the Sun impacts the audience with a potent, Brechtian blend of clean tech elements and refined acting. With a classic script written by Lorraine Hansberry and first produced in 1959, director Timothy McCuen Piggee leads the ensemble in relaxed, understated performances.  The show runs September 30-October […] 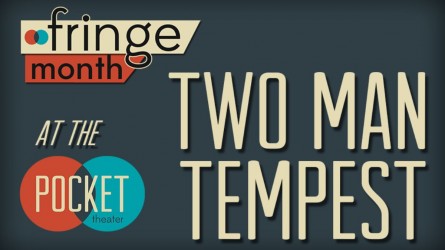 The Pocket Theater’s Two Man Tempest, though ambitious, fails to take the viewer by storm.
Two Man Tempest parodies Shakespeare’s classic story of magic, romance, and revenge. The 45-minute show, performed by Kendall Uyeji, Danny Lacker, and audience volunteers, is clearly the result of a lot of hard work. It features several rapid costume changes, puppetry, rap, and water guns, and leaves the actors visibly drenched in sweat before the end of Act 2. Despite the effort, these technical elements do little to make the show enjoyable. The script doesn’t pick up the slack. The jokes are weak, and they aren’t helped by the actors’ delivery or inability to stay in character.

“The Fever” by Wallace Shawn

In theater and movies fevers, like dreams, play a special role. In North American culture, they cue us to thinking what is expressed is coming from the deepest and unfiltered parts of our unconscious minds. So from the title alone we are to understand this is a stream-of-(un)consciousness work, and Wallace (Wally) Shawn holds tight to this trope to present his audience with the uncomfortable realities of being white and of the privilege classes in America.

Jazz DJ spins plates and jangles the marrow in your bones. The Holler Sessions was flawless: a mind-bending, soul-stretching deep-dive into the early history of jazz. Do not miss. Written and performed by Frank Boyd, directed by Josh Aaseng and Rachel Chavkin, and created in collaboration with the TEAM at ACTLab, this one-man show (eh, […]