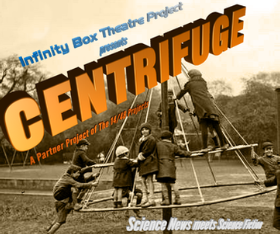 Poster for the show.

The set-up: as a partner project of the 14/48 Project (see reviews here and here), Centrifuge holds to 14/48’s sensibility of producing fully formed live theater in a limited amount of time. In Centrifuge’s case the clock began on Monday, June 20 when invited scientists and artists convened to toss potential topics into a large cylinder, one of which was randomly selected. … “Ready About and hard to lee.” Part of the fun opening night while waiting for the lights to go up was discussing with fellow audience members what that means.

After the draw, five writer-scientist teams had 48 hours to compose both a 10 minute play and a 5 minute science presentation. They reconvene on Wednesday with scripts at 5 PM. Randomly chosen directors then randomly selected their casts. Next comes two intense rehearsal days. Tech and dress rehearsals were this afternoon and the world premiere was tonight. The project closes with tomorrow night’s show.

Here’s how they lined up:

Funny introductory talk by Kwok, with PowerPoint, of the known positions for Frog Sex. There were six positions. However, recently researchers in India have found a species that used a seventh position. The play by Bailie bounced off this new discovery. Flory-Barnes portrays one of those researchers and with her husband—played by Kevin Lin—is trying to conceive a child. When Lin finds a local fertility statue and unveils it with the requisite prostrations, it returns to life after a 1000 year sleep and offers the couple lessons in sensuality and life. Good talk and acting.

Play #2: “Asteroids of Love” by Jennifer Dice; directed by Catherine Blake Smith and featuring Marianna de Fazio and Corey Spruill. With a talk by Greg Scheiderer, “Asteroids, Quasi-Satellites and Planet 9.”

Scheiderer’s intro lecture on the latest computer simulations about asteroids and planetary orbits was very good. He had only his fists to represent Earth and Asteroid 2016 HO3. Turns out 2016 HO3 began to orbit Earth about a century ago and will continue to do so for a few centuries more. Meanwhile, there’s a planet that no one has seen but by observing predictable deviations in other celestial bodies computers have calculated that it’s out there and has a 15,000 year orbit. Dice’s play used both of these discussions with a complicated plot about an escaping prisoner and what his girlfriend had to do to set him free. The tone of the play was Star Wars as it might have been written by Damon Runyon. The play wasn’t as good as the talk.

Play #3: “The Birthday Present” by Scotto Moore; directed by Kathryn Stewart and featuring Tracy Leigh, Marita Phelps, Mark Waldstein, and Trick Danneker. With a talk by Keith Seinfeld, “The Smallest Human Ever.”

In a cave on Floris island, which is east of Bali, scientists found a new human species in 2004—Homo floresiensis, nicknamed “The Hobbit” because of their small size and short legs. Adults grew to only about 3.5 feet in height with a corresponding much smaller brain. But researchers, Seinfeld explained, are surprised with their sophisticated use of tools and that they communicated well enough to hunt pygmy elephants found on their island. Moore’s script deftly explored several “what ifs” should usable strands of their DNA be discovered. Without using any of the terms of clinical trials such as double blind, control, etc. we learn that of the 3 children made from HF DNA only 18 year old Calliope still lives. Now with her full rights as a citizen she can do as she wants. Calliope considers traveling to Floris. Extra points to Moore for working in that as an adult she can expect the “usual” amount of surveillance. Good intro, script, and acting.

Play #4: “Chasm” by Bret Fetzer; directed by Jon Lutyens and featuring Chaillie Stidham, Dre Andersen and Jay Athalye. With a talk by Michael Bradbury, “Adrift in a Sea of Climate Change.”

Included in Bradbury’s talk was a quick history of Halley 6, the British research station in Antarctica, so named because its been moved 5 times. They are getting ready for yet another move because a huge chasm has cleaved the icy continent and threatens to shave off part of itself. This happens to be the part where Halley 6 currently resides. Bradbury also mentioned some invasive species like the king crab finding the area due to warming waters, the problems several species of penguins have finding habitat and avoiding sea lions. Fetzer’s play imagined how a pair of penguins might discuss their plight. Talk and play were excellent.

Play #5: “A Few Things Remain” by Pamela Hobart Carter; directed by Lenore Bensinger and featuring Meena Rishi, Geni Hawkins, Jess Askew, and Steven Sterne. With a talk by Genevieve Wanuch, “A Thing to Remember about Memory.”

Wanuch talked for 5 minutes without notes, but she needed clearer coaching for projecting and stage presence. Her talk was interesting. She told us about the challenges of researching the use of procedural memory as a structural aid to help Alzheimer sufferers have a better quality of life even if it doesn’t slow or reverse the effects of the disease. One problem: how to measure quality of life for people with diminished mental functioning? A great segue into Carter’s play which enacted exactly that challenge. Extra credit to Carter for literally using the theme as part of the dialogue. Talk could have been louder and a few of the scenes discussed in the play might have been better if they were enacted for the audience.

The Infinity Box Theatre Project promotes itself as “saving the world through science and theater.” Tall order. How well do these plays measure up to Centrifuge’s own PR? Here’s my take. On the vertical axis is the potential the play might have to spark discussions that would change a practice, policy, or belief. On the horizontal axis is the play’s quality as science and theater. A third measure is shown by the size of the circle: the larger the circle, the closer the play came to illustrating the theme.

Centrifuge is a partner project of the 14/48 Projects.