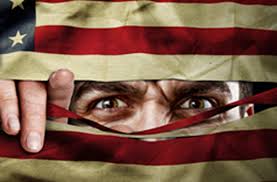 I’ve always had mixed feelings about the works of Stephen Sondheim. I loved Into the Woods and admired Sweeny Todd and pretty much accepted most of his other shows as fine pieces of musical theater, though maybe not my cup of tea. Where I drew a line was with Assassins, a play I have avoided seeing. Perhaps because I am old enough to remember the deaths of John and Robert Kennedy and Dr. King, I wanted nothing to do with an entertainment that focused on the killers and would-be killers of presidents. This is what I learned on opening night of Assassins at the ACT: It is a fantastically entertaining play; and it is as timely and important now as any show could possibly be for the American theater.

Sondheim’s music and lyrics combined with John Weidman’s book explore the lives and ideas of nine assassins ranging from John Wilkes Booth to John Hinckley Jr., the man who tried and failed to assassinate Reagan in 1981. These are our land’s outsiders for whom the American dream is ultimately a tragic vision beyond the bounds of their befuddled and angry reach. As Sondheim writes, “We’re the other national anthem folks, the ones who can’t get into the ball park.” Here are their songs and as director John Langs observes, we need not sympathize with them, but we should begin to try to understand why some of our fellow citizens feel so lost and unattended to.

This is the 6th co-production between The Fifth Avenue and the ACT and they’ve done some stellar work. The pre-show recorded music fills the theater with John Sousa like tunes and the sounds of anxious crowds; it is if as we are all ready to be part of the kind of political rally that shuns the very characters we’re about to meet on stage. Further in the background on the recording is the sound of fireworks, or are those gun shots? America’s love affair with firearms is a major motif throughout the play. We soon will be thrust into lives where one just needs to “move your little finger and change the world.”

The stage is filled with book-cartons standing in piles in what must be the Texas Book Depository. The boxes will become parts of all the other sets leading up to the Kennedy assassination scene. It is as if a little piece of that horrific setting touches upon all the tragic days of American presidents being shot through our history.

Musically, Sondheim gives us a whole batch of genres and styles, for each piece will match the era from which the assassin lived. Guiteau (Richard Gray) the killer of James Garfield, sings something like a minstrel-style cakewalk from the late 19th century while Hinckley (Frederick Hagreen) and Squeaky Fromme (Laura Griffith) perform an eerie duet with a James Taylor like love ballad. The score even features a demanding barbershop quartet number, “Gun Song.” All of the singing is spot on. Most impressive to me was the beautiful tenor voice of Nathan Brockett who assumes the role of The Balladeer.

The ensemble acting is uniformly strong with intensely dramatic scenes and wacky comedic bits all successfully hitting their marks. Kendra Kassebaum is alternatively hilarious and touching as Sara Jane Moore, a disgruntled accountant who failed in her attempt to assassinate Gerald Ford. John Coons, Richard Gray and Brandon O’Neill successful and unsuccessful assassins, imbue their acting with a fiery intensity that threatens to burn a hole through the stage.

Tim Symons is the musical conductor and on keyboards. His trio manages to sound much larger than a traditional three-piece combo.

Assassins opened in 1991 and had a revival in 2004. In the midst of a bewildering campaign season propelled by voters who seem to be waiting for “another national anthem” and nearly a weekly report of mass gun violence, Assassins is up and ready today to initiate an exploration of the darker side of the American dream.

Assassins runs through May 8 at the ACT-A Contemporary Theatre in the Falls Theatre, 700 Union Street downtown. For more ticket information go to www.acttheatre.org or call the ACT Box Office at (206) 292-7676.