Treat your Family to This Christmas at Taproot 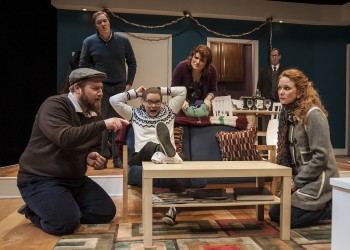 World premieres are treated as something special in theater, as well they should be. They often present to audience members new talent it will reward one to continue to pay attention to. Such is the case with This Christmas up and in full run at Taproot Theatre in Greenwood. Scott Nolte, Taproot’s Artistic Director and director of this production, said they began with a call for play concepts about a year ago. They narrowed it to two, then chose Anne Kennedy Brady’s two act. It’s her second play, but still a wise choice.

This is a family Christmas comedy. Christmas has both cultural and family traditions and the family traditions renew the cultural ones. Without families doing roughly the same thing year after year the traditions die out, like neglected literature. The Masters (Leah and Mark) moved to Seattle in April and have a tradition of eating a quiet meal in a restaurant, exchanging gifts, and going to a candlelight Mass. What makes this play fun are the references to Seattle (it snows this particular eve, so everything shuts down because its hilly). Leah has a surprise she wants to spring on Mark, something to do with the inscription on the chocolate cake she’s commissioned. The opening funny scene is a harried waitress (Elise) calling to get the instructions correct. There’s a strong chance the inscription may read “Congratulations New Dog” which is not what Leah intended. The word she wanted did start with “d” as in “Dad.”

Then there’s Mark’s mother Helen who swoops back into their apartment claiming the flights out of Seatac were cancelled, a next door neighbor Patrick who hadn’t really introduced himself but suddenly is very much in their apartment because he’s attracted to Mark’s mom. Upon learning that Helen likes cookies Patrick, with neither cooking skills nor ingredients begins to bake some. He continually returns to borrow sugar, flour, and butter. Oh, the mother learned that her taxi driver Serge didn’t have any plans for the evening except to heat up a frozen pizza and took it upon herself to invite him over to share the Christmas Eve meal. Leah is intent on getting Mark out the house to the restaurant. Mark, though, is on a hot streak with his novel on Bosnia and keeps delaying departure so he can make notes while the ideas are hot in his head. Then, he doesn’t want to leave his mother there alone, believing it’s not polite, despite Helen’s protests to the contrary. He becomes even more interested in staying in when he learns that Serge is from Bosnia. Pressures are mounting and everyone is getting more edgy as Elise keeps calling Leah to say that the restaurant has moved up its closing time. Because this is a comedy with surprises as part of its bag of tricks I’ll not say more lest I spoil the fun.

Nolte freed the cast to make full use of Mark Lund’s set design. With the amount of space at their disposal, the Masters seem to be doing well on just Mark’s income. The cast also adroitly managed lots of props and accessories. Christmas traditions involve a lot of stuff and things. In this play we have the Anglo-American Christmas traditions of a Christmas tree, gifts, ornaments, lights, a Nativity Scene which was semi-handed down to Leah, and, of course, the wine that Serge brings. There’s also big band Christmas music by the Rat Pack (Frank Sinatra, Dean Martin, and Sammy Davis, Jr.) And a portable record player (!) that Patrick hauls in to play vinyl. Just something a bachelor academic would have.

In a comedy everyone has to uphold their part to make things work. Charity Parenzini as Leah is the center of the action and the other players interact with her like so many parts of a mobile. Parenzini wins our sympathies and we ride the emotional roller coaster of the play right along with her. You definitely get the feeling that her Leah is competent and not much of a long sufferer, though this particular evening breaks free of her control.

Matt Shimkus as Mark had basically a stem of a line which he kept filling in with different excuses for much of the first act: “I’m not going out because …” He could have been more anxious and animated about getting his ideas down while they were hot. Perhaps Brady might have written in a few lines from their past experiences. Mark might be intent on never repeating that time when he didn’t get down something he thought he would remember and a terrific idea was lost forever. Or have Mark remind Leah of Coleridge’s famous experience of awakening from a dream with the whole of Kubla Khan laid out for him. As he was committing it to paper he was interrupted by creditors and … Poof! … he never could return to the original inspiration.

Macall Gordon as Helen Masters makes herself the counterweight to Leah. She flits about the stage “being helpful” and comes off well as a romantic interest for Patrick. Robert Gallagher plays Patrick Chamberlain as the next door neighbor with a thinly disguised interest in Helen. It’s funny to see him return again and again for more cookie ingredients, but then you begin wonder what does he subsist on?

Jenny Cross’s Elise had that rough around the edges young service worker vibe. If this character is ever your waitress, my advice is to keep an eye on her and ask her to repeat your orders before leaving the table. Kevin Bordi as Serge keeps a low profile as the Surprise Invited Guest. This character’s funny one liners Bordi delivers well with deadpan timing.