Come From Away Soars at the Rep 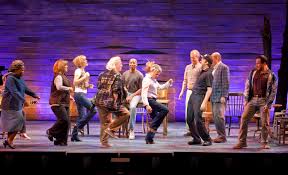 The Seattle Rep’s premiere of Come From Away could not have been timelier. The tragic events on the streets of Paris occurred only days earlier. The moment seemed to echo another era when western Europe grappled with darkness, of which Dickens noted “It was the best of times, it was the worst of times…” The play explores how immense tragedy somehow, someway brings out the best in humanity. To say that Come From Away is inspirational is greatly underselling the show. The work provides one of the most uplifting theatrical experiences imaginable.

The script is only the second finished product by young Canadian playwrights Irene Sankoff and David Hein. In 2010 they wrote “My Mother’s Lesbian Jewish Wiccan Wedding” based on David’s own family. Michael Rubinoff, who later founded the Canadian Musical Theatre Project, was impressed with their work and came to them with another idea for a show. After the attacks of September 11, 38 planes were diverted from the skies and forced to land in the tiny town of Gander, Newfoundland. 7000 displaced travelers were welcomed with open arms and hearts by the inhabitants of this remote village. The young playwrights traveled to the Canadian outpost and stayed for a month, talking to hundreds of people and gathering thousands of stories. The play is the remarkable product of their work.

Perhaps the most noteworthy quality of the show is its success as an ensemble piece. The twelve actors are a wonderfully talented blend hailing from an array of locales including New York, San Diego, Seattle and even Newfoundland. A variety of body types, ages and colors are represented. The one unifying element I spotted was that they could all sing and dance really, really well. The opening night energy was palpable, with the first number, “Welcome to Newfoundland” nearly blowing the roof off of the place.

The actors all play both the villagers and the stranded passengers, referred to as “The Plane People.” The two jobs are so successfully handled that the cast actually seems to be much larger than the twelve listed in the program. It is a little unfair to single any one particular performer out, for the acting was uniformly stellar. I would merely note that Eric Ankrim, Rodney Hicks and Kendra Kassebaum all had flat out show stopping moments, some hilarious and some heartbreakingly moving.

Transitions were skillfully handled by director Christopher Ashley, the artistic director of the La Jolla Playhouse that co-produced the work. The set and actors seamlessly moved from a schoolhouse, to an airplane, to a bus to a river’s edge and then to a bar; the changes never getting in the way of the narrative.

A mid-show highlight was a beautifully rendered “Prayer” in which the entire company, led by Chad Kimball and Q. Smith, simultaneously reach out to the god and religion of their choice.

The play might have slowed just a bit when Jenn Colella portrays a pilot relating her back-story with “Me and the Sky,” simply because it seemed to stray from the important through line of the magical interaction between the travelers and the villagers.

“Something’s Missing” was a company piece that explores the eerie emptiness that sometimes comes to us once heroic deeds are no longer called for and we must simply get on with the daily chore of our lives. The lives of the villagers and The Plane People did indeed go on, but they did have a wonderful 10-year reunion on this unique rock formed millions of years ago by a continental collision. As playwright Hein noted, it’s “a wonderful metaphor for the world coming together.”

Ian Eisendrath was the conductor and keyboard player for the eight-piece band that provided the instrumentation for the music that sounded something like folk rock meshed with a strong dash of Newfoundland. Their rousing closing number joyfully sent the packed house out into the rainy Seattle evening.

Come From Away runs at the Seattle Repertory Theatre in the Seattle Center through December 13. For ticket information call 206-443-2222 or go to www.seattlerep.org.