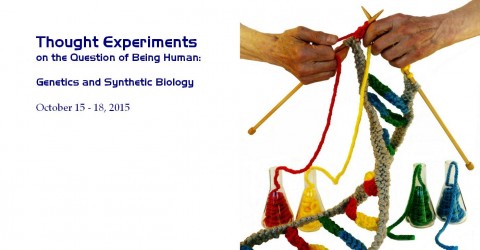 What will the world be like when we can control our own genetics? Turn ourselves into whoever and whatever we want to be with a little bit of tweaking? That was the topic for this year’s “Thought Experiments on the Question of Being Human,” an annual collaboration between local playwrights and scientists that makes you stop and think about the implications advances in science and technology are bringing us.

Though not off book, the talented cast composed of regulars in the Seattle theatre scene and some recent graduates were able to keep the distraction and loss of eye contact to a minimum, even turning pages in character. Two of the four short plays also filled in the minimalist set design with spoken descriptions, which were a nice prompt for my imagination.

The four plays also built upon each other nicely, each one advancing a little farther into the future and getting a little farther from where we are now. The first, written by Bryan Willis with the help of plant biologist Jennifer Nemhauser debated the value of the genetic modifications we already make to our vegetables, and the second by Courtney Meaker in collaboration with Robert Carlson fast-forwarded to a world where parents buy improvements for their children—with chilling consequences. Robert Carlson, who’s written a book called “Biology is Technology: The Promise, Peril, and New Business of Engineering Life,” led a discussion after the show with the audience on some of the issues with genetic modification.

“Nature’s Frivolity,” by Kelly Mac drew inspiration from Eric Klavins’ research at the University of Washington on engineered bacteria to depict Shakespeare’s Oberon and Titania as benevolent gods, helping young people fall in love with synthesized pheromones. The final play by Holly Arsenault and pediatrician/immunologist Andrew Scharenberg took the audience to the not-so-distant future, where gene insertions based on current technology have become the fashionable new way to tweak your personality.

Though the issues they raised were intriguing, the stories were a bit hard to follow in places, and gave the sense that I was missing plot points, or just not catching the references. Overall, the title captured it best; these are not so much plays, as thought experiments on what the rise of genetic modifications could mean. If you don’t have time to catch this year’s show, next year’s theme is already set as “Memory and Identity.”