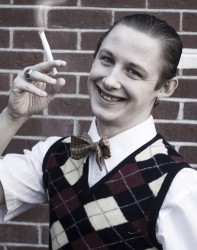 The Leafy Green Assassin of Youth

Reefer Madness originally was a 1936 movie, financed by a church group, to warn parents, not about demon rum, as this was after prohibition had failed, but against marijuana use.  The film coincided with an attack by the U.S. Federal Bureau of Narcotics, culminating in a Federal tax in 1937 which was opposed by the AMA,  N.B. Cannabis had been listed in the United States Pharmacopeia from 1850 until 1942, during which time it had been, prescribed for labor pains, nausea and rheumatism.

In the 1970’s the film became a cult classic of misinformation as the baby-boomers embraced marijuana as a pathway to spiritual enlightenment.  Kevin Murphy, and Dan Studney turned this campy movie into a musical, which opened at Seattle Musical Theatre this past Thursday.

It tells the story of an all-American clean cut “preppy” high school student, with an innocent girlfriend, who is lured into taking marijuana, by an evil pusher, who preys on kids at the local soda fountain. It portrayed marijuana as instantly addictive and as damaging as meths.  When I first saw the movie in 1971, there was also talk that LSD created chromosomal damage with warnings  that one’s children would be born with wheels instead of feet.  One of the other messages of the film was that the African American Jazz musicians were luring decent white women into sex orgies through marijuana use.  In short it used every fear tactic imaginable.

The scenes of the movie are re-enacted with song and dance numbers interspersed and some amusing and clever power-point silent movie type subtitles projected on the wall, just to keep us informed about the evil degradation awaiting anyone who takes even one puff of reefer.