The Best Christmas Pageant Ever 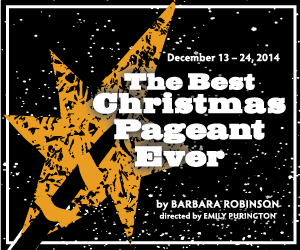 Seattle Public Theater has been producing The Best Christmas Pageant Ever for 14 years now, which is about how long it’s been since I read the book by Barbara Robinson that the play is based on. A heartwarming tale of the bad kids getting involved in the church pageant, and the good kids learning to be a little less judgmental, the show mirrors some of what SPT does in terms of youth involvement.

With the majority of the cast under 18, the show appeals to a younger audience and anyone who remembers what it’s like to be bullied, different, or get a big part in the school play. Among the adults, both Erin Stewart and Rebecca M. Davis’ humorous portrayals of overinvolved mothers brought a lot of laughs.

I have only seen one actual Christmas pageant in my life, but I don’t remember it giving me shivers the way The Best Christmas Pageant Ever did when the lights were dimmed, the carols were playing, and the Virgin Mary played by Imogene Herdman (played by Skylar Tibbets) came onstage. Finish your evening with a stroll around Green Lake and a mug of hot chocolate and Christmas will be one day closer.