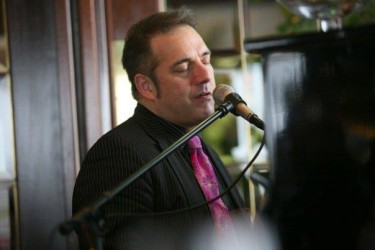 Hands Solo—Pianoman in the Bullitt Cabaret at the ACT Theatre is a delightful one-man show starring Victor Janusz. It is directed by Lori Larsen. Featuring of a handful of original songs mixed in with cabaret standards, movie, and popular tunes, Janusz musically illustrates his lifelong love affair with the piano. Director Lori Larsen is a Seattle native and a founding member of  the famous Empty Space Theatre.

Janusz relocated to Seattle after honing his theater chops at top-tier acting training studios in New York. But, most of his work there, he claims, was Method Waiting, not Method Acting. Returning to the piano helped Janusz find a life and a living as a professional artist.

Janusz performed a 13-song uninterrupted set. Between the songs he wove the story of his life. After he got fired by his piano teacher at the age of 8 because of his jazz inclinations, she said; his father commissioned him to learn a waltz that his parents would dance to on Saturday nights.

Five of the songs he wrote or co-wrote, and the other 8 were by artists like Hoagy Carmichael, Andre & Dory Previn, Steely Dan, Phoebe Snow, Elvis Costello, The Beach Boys, Bacharach and David, and the Gershwin Brothers. The mix of the personal with the recognizable gave a sense of familiarity to the show. Half was his story and half was the soundtrack of Everyone. I suggest that Victor either speak louder so that he’s heard in the balcony even during his stage whispers, or get a second mike for his storytelling pieces. If you go and really need to hear, find seats near the front.

Janusz has played them all: Nordstrom’s, the Space Needle, corporate events on boats, nursing homes, and political gatherings.

He has also performed at 168 weddings. This is a very bitter-sweet part of the evening where he openly discusses his sexuality, romantic life and Marriage Equality. In the run-up to the 2008 elections, Janusz had a chance to play for candidate Obama at a political function. When Obama asked him after the photo-op if he had any “issues” he wanted the candidate to know about, Janusz was ready!

Janusz reminds us that music provides a “time tunnel” for our lives, serving as both soundtrack and one of the longest surviving memories we have because music involves so many areas of the brain. It got me wondering, what—at the root level—is this art form about? At its best, cabaret performance is about connection: to the music, to the moment, and to the unique combination people in the audience.

This show reminds me of the professionals in any field who take the paying work that shows up to keep their dreams alive. Many times I know he does not have everyone’s undivided attention, and probably finds that the surrounding conversations drown out his performance. Not in this setting, not during his solo show. It’s all his and we’re all his for the evening.