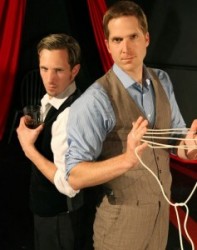 Written by Patrick Hamilton, the play ROPE opened at Ghost Light Theatricals in Ballard on Thursday night.  Inspired by the philosophical rationalizations used by murders Leopold and Loeb to justify their attempt at a perfect crime, it first opened in London in 1929 and was revived there in 2009.

Two well-born homosexual aesthetes in 1924, Brandon and Granillo have murdered one of their fellow undergraduates, Kentley; stuffed him in a trunk in the living room and invited some of his friends and relatives for an evening of verbal tap-dancing around the mine field of their guilt.   A long Pinteresque discussion ensues concerning Nietszche’s criticisms of traditional morality, what is in the trunk, where Kentley is and very little else.  There is practically no plot, very little intrigue and although the two do get caught by one of the guests, there is only one clue and it is not particularly suspenseful.

In order to make a play which is all dialogue and virtually no action work, it is necessary to have actors and a director who can make it zing.   Unwisely, the director chose to use British accents, which the actors could not handle, since they were inconsistent and caused the actors to stumble so much that the accents got in the way of their performances.   Many words were mispronounced, and the dialogue was often incomprehensible.  Instead of trying to produce British resonance by changing the vocal placement, the actors merely pronounced some of the words differently or artificially spoke above their optimal pitches.  Zinging was just not present and the flaws in the script were exacerbated by the poor direction.

This was a pity because many of the actors, who I have seen in other roles, are in fact quite good and with better directing and coaching, could have delivered better performances.