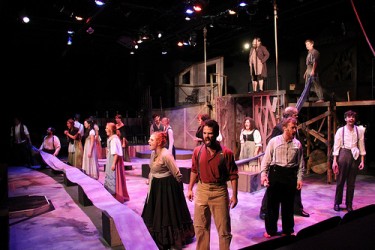 Les Miserables is a big, big show. It requires multiple settings, an ample orchestra, and a whole lot of powerful voices. Here’s to the Balagan for taking on this daunting musical theatre icon; the local crew has succeeded on many levels. It is quite a treat to see such a major production in the smallish confines of the Erickson Theater, something like catching The Rolling Stones at a local pub.

After 21 years at their Summit Ave location on Capitol Hill, Theater Schmeater is relocating.  They’re leaving their old grounds with the farcical Game Show, a satiric spoof on the popular television quiz shows of the late 20th century.      Half the fun here is in the set up.  The cast is really […]

In the late 1930s Thornton Wilder wrote Our Town as a reaction to the popular, “devitialized” theatre of his time. The over-stuffed, toothless, realist drama that ruled the stage neither disturbed nor provoked, Wilder thought, but only served to soothe the middle class audiences who had brought about its creation. Wilder’s stripped down, prop-less American […] 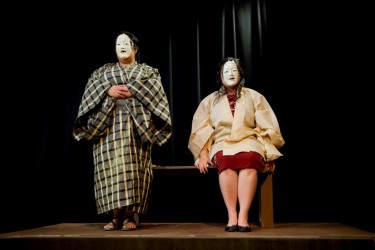 REVIEW: “The Realm of Whispering Ghosts”

“The Realm of Whispering Ghosts,” directed by Arne Zaslove with a script created by  Seattle writer K.C. Brown, is an ambitious gathering of historical fact, fictional “what ifs,” Japanese Noh theater conventions and costumes, projected images, original music, and intimate glimpses into personal and political dynamics. While all the elements of the production are impressive, […]