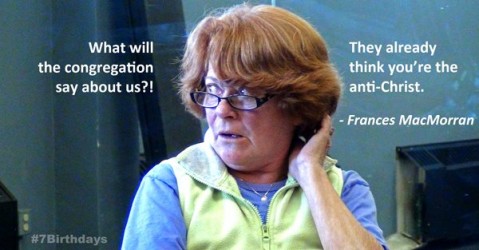 For a night of shameless comedy and theme-appropriate cocktails, like Gin and Sin or a glass of the blood of Christ himself, check out Seven Deadly Birthdays, an original play written, acted, and directed by Copious Love Productions.

The play revolves around the seven significant birthdays of Madeline “Maddie” MacMorran, the often confused and hapless, though endearing daughter in a family of Irish American Catholics. Each time we meet Maddie, she narrates the story of her most recent deadly sin from within the confessional. Her visits are punctuated by a vociferous and reprimanding Mother Superior, played by Saya Burchfield. As she progresses through each birthday, the confundity of the church’s rules leave Maddie even more perplexed.

Lauren Johnson captures Maddie’s character colorfully. Maddie is human. Humans make mistakes. Can’t she just catch a break, already? Lauren shared Maddie’s story in a way that really makes you want to get on her side. She’s easy to relate with.

Each scene was concluded with a deadly hymnal sung by Mother Superior. Saya Burchfield did a fantastic job there. She has a strong voice and a commanding character that’s as vital to the play as Maddie herself.

The set and costuming were simple but well utilized. The crew placed the confessional and pew onstage while Maddie’s anecdotes were performed below on the main floor. In this way they were actually able to maximize the space and bring the audience in.

Copious Love actors emphasize laughter for everyone in the unfolding of Seven Deadly Birthdays, and they pulled it off. It’s clear that this original work was a labor of love approached with lighthearted enthusiasm. And something must be said for a staff of cocktail waitresses dressed as nuns providing beverages for the duration of the show.