Schenkkan’s Triumph and (Very)(Un)Merry Wives, the Highs and Lows of the OSF experience 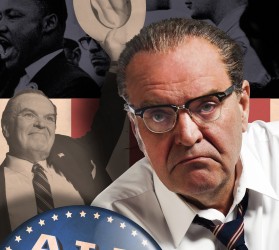 All the Way with LBJ

I saw two new plays at Ashland during my recent trip that represented the most exciting and most disappointing kinds of theatre experiences OSF can create with its commitment to the development of world premieres.  OSF’s initiative to commission a cycle of new of plays addressing revolutionary changes in American History has brought forth a treasure with All The Way, Robert Schenkkan’s historio-drama concerning the traumatic beginnings of Lyndon Johnson’s presidency. Sadly, The (Very) Merry Wives of Windsor, Iowa, by Alison Carey and adapted from William Shakespeare’s play of nearly the same name, is a earnest but clumsy disappointment, only salvaged by the loveliness of OSF’s outdoor Elizabethan Stage, and the dependable delight of the excellence of OSF’s company of marvelous actors on any given summer evening.

Robert Schenkkan, one of the United States’ finest dramatic historians, has scored a triumphant success with the premiere of All the Way,  a exactingly-researched and gripping drama concerning the changes to American history created by Lyndon Baines Johnson’s ferocious rise to the presidency in the aftermath of JFK’s assassination.  This project represents the best OSF can offer in the development of new work for the American Stage.  Conversely, Alison Carey’s collaboration with playwright William Shakespeare resulting in The (Very) Merry Wives of Windsor, Iowa  landed on this theatre-goer with a disappointing and over-earnest thud in the cornfield of the Elizabethan Outdoor Stage.

My partner and I saw a Sunday matinee of Robert Schenkkan’s All the Way, directed  by OSF artistic director Bill Rauch.  Everything missing from Party People (the other history cycle play under commission this season) in terms of well-crafted story-telling and dramatic history in play-form was present in this masterful docu-drama of Lyndon Baines Johnson’s moment during a nation’s traumatic loss.

All the Way (an unfortunately weak title) begins with the generation-defining assassination of John F. Kennedy that thrusts LBJ’s into leadership, and encompasses the months that led up to election in his own right.  This epic work rests of the formidable shoulders of actor Jack Willis, in his second season at OSF.  I unequivocally nominate Mr. Willis for OSF performance of the year.  He positively channels the spirit of LBJ, and his performance is as large as life, no less, no more.  We meet a giant of a man, foul-mouthed as a football coach, ambitious as a Texas legend can be, and ferociously driven to attain his political goals, no matter the battered bodies he must leave behind.

Schenkkan has already won the Pulitzer Prize for The Kentucky Cycle, and now he should win the (non-existent) humanities prize for dramatic history on the stage.  Schenkkan can step into the shoes previously worn by writer/director Emily Mann and writer/performer Anna Deveare Smith.  Mann’s play Execution of Justice addressing the trial of assassin Dan White, and Smith’s work in traumatized communities, similarly chronicle transforming moments in American History, drawing from court transcripts and interviews, respectively.  Schenkkan does not adhere to the strictures of found texts. Rather, All the Way is the work of an epic playwright, with only critical punctuation from the speeches of LBJ, and Martin Luther King, along with other historical sources.

The drama lies in Schenkkan’s revealing of the  intentions of this politician.   What did LBJ want? Justice or Glory?  Civil Rights or the Absolute Power to bestow rights on others? Did he have allegiances to the civil rights movement and its leaders, or was he merely using them to gain the love he craved from his constituencies?  Was LBJ no more than an ambitious, ego-driven megalomaniac? Or was he one of the most effective liberal back-room politicians of the modern era?

Robert Schenkkan has created a epic work of theatre that gives audiences and actors all they need to struggle with these questions, and mercifully, without the didacticism that would preach what the answers might be.  This is what great political theatre should be.  Breathtakingly exciting, masterfully acted, directed with precision and efficiency, and ultimately, leaving the decisions up to a newly informed and engaged audience.  Chillingly ghost-like performances of Martin Luther King and Stokeley Carmichael (Kenajuan Bentley and Wayne T. Carr) Governor George Wallace (Jonathan Haugen again, as far from the Butler Hives as one can travel), Ladybird Johnson and Coretta Scott King (Terri McMahon and Gina Daniels)  and J. Edgar Hoover (Richard Elmore) take us deeper into the world.  The entire acting ensemble is excellent.  The emotional heart, (and heartlessness) of LBJ’s psyche is revealed when he abandons his closest aide Walter Jenkins (elegantly played by Christopher Liam Moore) when the young man needs him most.

Enough said.  Mr. Schenkkan’s first act needs trimming, but the second act plays like gangbusters, leaving us breathless as we witness history, one we think we knew, unfolding in new light before our eyes. This is theatre at its highest purpose, and a triumphant success of OSF’s United States History Cycle project.  Bravo.

Our final play of the weekend was the hugely disappointing adaptation of Shakespeare’s Merry Wives of Windsor.  Writer and adapter Alison Carey has been a sturdy collaborator of Bill Rauch’s from his Cornerstone Theatre days, and is also the director of the commissions in the US History Cycle initiative.  I was so looking forward to this irreverent treatment of one of my least favorite of the Bard’s comedies.

Carey and company’s advance advertised wives of both heterosexual and homosexual stripe, a setting in a small Iowa town filled with crazy characters, and Falstaff as a pathetic political candidate who simply can’t keep his fly zipped up.  Sounds promising, right?  But alas, Carey is far too smart a writer for the dumbing-down that happened with Windsor, Iowa.  How amazing that she can write in iambic pentameter, intermingling her verse with Shakespeare so that some can hardly tell where one writer begins and the other ends.  But hey, you still have to figure out what story you want to tell!  Is Windsor, Iowa a place where lesbians are the norm, Falstaff is out to shame them, and to proclaim one’s heterosexuality is a act of bravery?    Or is a place full of buffoons and country bumpkins, who dress like cartoon characters and don’t care whether they sleep with a member of the same sex, the opposite sex, or a prize-winning pig?

If Iowans are as stupid as bad southern accents make them sound, then maybe the legalization of same sex marriage in Iowa is the act of fools, not progressives. In my experience, that just isn’t the case.  I longed for a smarter play.    The (Very) Merry Wives of Windsor, Iowa and their cohorts had to work way too hard for their laughs inside this awkward vehicle.  Carey shot an arrow and missed her target, but it might be that she forgot to create one in the first place.

Again, the hardworking actors of the OSF company did the best they could with an unwieldy and ill-fitting adaptation.  There were performances that yielded some hearty chuckles but the cornfields of Windsor, Iowa, were just, well, far too corny.

The Oregon Shakespeare Festival is an amazing place to view theatre.  Whether or not a given project entertains, challenges, or disappoints, the work will always be designed and performed with absolute commitment, professionalism, and style.  And at today’s OSF, with more than 75 years of history behind it and a bright future ahead, you can expect thrills, chills and spills that you will never forget.

The Oregon Shakespeare Festival, in Ashland, Oregon, runs Animal Crackers, As You Like It, All the Way, Party People, The (Very) Merry Wives of Windsor, Iowa, Henry V, Troilus and Cressida and Romeo and Juliet and Medea/Macbeth/Cinderella in repertory until the season closes on November 4th.  Off-season (after Labor Day) brings greatly reduced crowds and prices for hotels, etc.  Go to www.osfashland.org for schedules, tickets, seating charts, membership information and more.  Call the Box Office toll-free at (800) 219-8161,  for information about all things Festival.