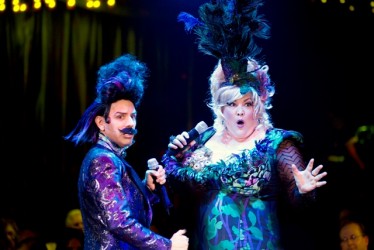 As diners settle in to their five-course meal in the Moulin Rouge room of Teatro Zinanni, a large, white-suited man with a booming voice (singer Mike Geier as “Mr. Otis”) storms in and announces that the restaurant is to close immediately.  He and his partner, Mr. Ching (strap acrobat Ling Rui)—or as Mr. Otis calls him, “Mr. Cha-Ching”—are about to tear down Zinzanni’s historic spiegeltent to make way for a multi-use building complete with condos and not one, but two Trader Joe’s.  The servers, cooks, and other workers circle angrily around the entrepreneurs, tear up their pink slips, and proceed to “take back” their jobs through song, dance, comedy, and circus acts.  As they say, they are “10 of the 99%.”

Stepping into the Zinzanni building, with its thick red velvet drapes, gold tassels, rows of mirrors and twinkling gold lights, is like stepping into a cabaret in old-world Europe.  The plotline of Zinzanni’s current show, Caliente!, enlivens the atmosphere with a Latin American twist:  A number of the characters about to be out of work are Mexican, including Cinco (Robert Lopez) and Tres (Christine Deaver), a brother and sister team who have an obsession with Donnie and Marie Osmond.  As they set out to become Catholicism’s answer to the Mormon duo and save the restaurant, they are joined by a handywoman with a hammer (Argentine malambo dancer and percussionist Ann Bernard), a janitor with a tall, sturdy mop (Chinese pole acrobat Domitil Aillot), a costume designer with a knack for hula hooping (Vita Radionova), and two servers (singer-acrobats Gregory Marquet and Mickael Bajazet).

The night proceeds with each of the workers and entrepreneurs revealing their hidden talents.  Lopez and Deaver both have wonderful singing voices, work very well together and with the audience and have excellent comedic timing.  Bernard, Radionova and Rui are virtuosos of their crafts, as is the operatic (and very funny) Mike Geier.  The three members of Les Petits Frères, Aillot, Marquet, and Bajazet close the show with a gravity-defying acrobatic routine, all done without a mat or net.  In fact, none, of the aerialists use a net.  The action at this show is definitely up-close, personal and at times jaw-dropping.  Be prepared to both “ooh” and “aah.”

Caliente! is directed by Ricardo Salinas, founding member of the Chicano performance troupe Culture Clash.  In true Culture Clash style, the narrative portions of the show are filled with very timely allusions, from a mention of “that horse show, Cavalier,” playing on the east side to the gossip that a certain “Billy Gates” likes to use Groupons during happy hour.  Also in true Clash style is the didactic edge that seeps into the show at a couple of points, particularly during a spoken word piece about Charlie Brown (or Carlos Moreno) in which Lopez laments the lack of Latin characters in the Sunday funnies, or Otis’s morose song about border fences and hard-working immigrants just trying to survive.  Salinas stated about the show, “Although [it] is Latin-infused, I think all audiences will take away a very universal feeling; the universality of listening to music and eating great food. Also, times are hard now in the United States. We address this a bit in Caliente!, but in the most entertaining of ways—through lots of satire and humor, and one incredible Latin meal!”

His statement proves true, particularly in the finale.  (Not to give too much away, but if you have ever wanted to see a very large man dressed up as the Statue of Liberty, surrounded by slices of cake while servers wearing cabaret-style mini dresses parade about with flags from a range of countries—not just the US and Mexico—now is your chance.)

After the finale, all of the staff—from the performers to the servers to the musicians to the cooks—came out and took a bow.  They certainly earned it.